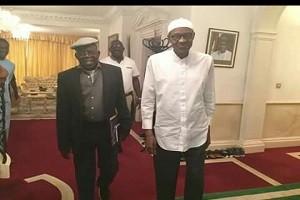 Popular Abuja Prophet, Joshua Iginla, who rightly predicted the unscheduled medical trip of President Buhari early this year, has warned the presidency again not to politicise his health based on what God revealed to him.

He has appealed to his followers as well as Nigerians to fervently fast and pray along for him on Friday.

The Abuja based clergy and shepherd in charge of Champions Royal Assembly re-emphasised this issue on Sunday while issuing a prophetic advice.

It would be recalled that he was the only clergy who accurately gave a prophetic message to President Buhari in March 2017 while he was in London for his medical vacation that he saw him going back again impromptu if he ignored his warning.

On Sunday, May 7, 2017, President Buhari returned to London for medical follow up as predicted by the man of God.

“So when God put anyone there, it is for a purpose. I’m just a prophet with a message and what is the message? The Lord said take care of your health, don’t allow people around you to use your head to play politics.

“In my vision, I saw some people preparing with army boots and uniform saying take your bag and start travelling and I saw some group of doctors with whites saying don’t wear this boots, let’s be through with you.

“It’s a prophetic advice, treat yourself, listen to the medical advice and don’t hurry home because what is the need of coming home and rushing back? It is the rushing back that is the major reason God is saying we should pray for you and i should tell you. God has brought you this far, the seat is there and nobody will take it from you; it is only the living that can rule Nigeria and not the dead.

“Wait until there is a medical clearance (that is what God said i should tell you.) Do not allow politicians to use your head to play politics, only the living can lead Nigeria.

“In my vision, I saw some people saying wear the boot wear the boot….somebody landed in the country….what is this landing and what is this impromptu journey out again? This is because there was an unfinished business medically.

“Let your persecutors persecute you and say whatever they want to say but make sure you give your health attention…..It is only the living that can rule Nigeria…..what is the essence of me coming back and everybody is saying oh I am back and after sometime I can no longer hold it again? What is the essence of me being carried and I don’t even know where am carried to? This is the vision I saw while in South Africa,” Iginla told his congregation.

Interestingly, Iginla, in his 73 prophetic insights for the year, had said that the President would travel out for an unscheduled health check-up, but this time, it would be more serious.