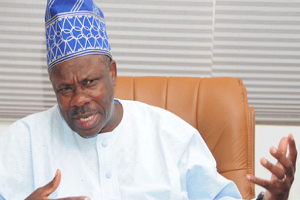 Governor Ibikunle Amosun of Ogun State has declared that the state won’t be a fertile ground for hoodlums and criminal-minded elements.

He made the remark while receiving the new Commissioner of Police, Ahmed Illiyasu, who was posted to the state to replace AbdulMajid Alli who was recently promoted as Assistant Inspector General (AIG) in charge of Zone 2.

Amosun noted that the peaceful atmosphere prevailing in the state “won’t be surrendered to hoodlums and criminal-minded elements now disturbing our people located at the riverine areas.

“I want to say Ogun State is still and would remain a no-comfort zone for criminals. We won’t accept what some people are doing in the riverine areas presently.”

The governor praised the AIG for ensuring that Ogun remains peaceful, and saluted Alli’s professionalism and competence. The governor said the new AIG’s promotion was well deserved.

Alli, while introducing the new Commissioner of Police, described Illiyasu as a very hardworking and no-nonsense police officer.

The new AIG Zone 2 therefore issued a red card to hoodlums terrorizing the riverine areas of the state, warning that, “We won’t accept the present action of some criminal-minded people disturbing the people in villages near the waterways. I am issuing a red card to them. They should stay clear of Ogun State.”

He declared that his number one priority as the AIG in charge of Ogun and Lagos states is “keeping our waterways safe for the people.”

On his part, the new Ogun State Commissioner of Police assured the governor of his total commitment to the maintenance of peace and security in the state.

Illiyasu also commended the infrastructural drive of the governor, noting that, “I was in this state four years ago and I know how it was, but what I saw when I came now is a radical difference. I can see a serious difference.”