I Won’t Sell My Wife To Pay Ekiti Workers—Fayose 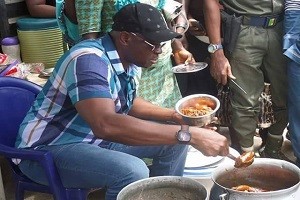 Ekiti State Governor, Ayodele Fayose, says there is no way he can sell off his family or himself just to pay the striking Ekiti workers.

Fayose made this known on Thursday while addressing newsmen on salient issues affecting the state, top of which is the inability of the government to meet its obligation in the area of salary payment.

The governor noted that what he gets from the federal allocation monthly cannot pay the workers and sustain the state at the same time.

His words, “I want to make some clarification particularly on issues that affects the welfare of our workers. I want to say very expressly that workers are the engine room of government and they deserve all the encouragement but currently we are in crisis financially, the average wage bill in terms of payment of workers is between N2.5 to N2.6 billion which includes parastatals, university, college of education and all that.

“And since I became governor I have always put this before the leadership of labour, each time they give us a figure from Abuja, I give the paper to them for them to share and bring it for signature.

“So, rotating an alternating payment in terms of paying the university, the college of education, higher institution and so on, we pay them this month and pay the major work force next month.

“That has been the practice and we work with a technical committee of labour and government, we meet monthly to disburse. I want to tell u very expressly that it has not been easy.

Fayose stressed that, “This is not about Ekiti alone, all states reasonably are affected by this development irrespective of which governor, which party controls that state. So as it is, I am doing my best within the ambits of availability.

“You will recall that I took over a debt profile of commercial loan of over N31 billion where deductions are made from source and apart from the commercial loan we have the bond by the last administration as a result, it is difficult for me to sustain the salaries.

“Right now, I am helpless and that is the fact. Yesterday, the 25th of this month, the Commissioner for Finance called me that we got N751 million which is one third or one quarter of the wage bill.

“So I need to set this record straight, I have been guided and being careful and that is why most of the time when workers do not come to work, I don’t have the morals to go and stop them from coming late or not coming to work because when you don’t pay wages, you are handicapped to enforce discipline in the people.

“As it is, I am doing my best on the needful but it is difficult for me to sell myself or my wife or sell my property, it is a trying time for our state and for Nigeria, I can only deploy what I get from Abuja within available resources, we are trying our best to improve on the internally generated revenue. You will discover that it is very difficult to squeeze water from a dry tissue paper.

“You can’t get money when people don’t get wages, when the money doesn’t circulate, when business are not running, taking IGR from them will be a bit difficult. As it is, this is the position, I just want the public, the workers to understand that it’s in my priority to make them very comfortable, apart from wages, it is the responsibility of government to provide electricity, it is the responsibility of government to provide security, to provide for the less privileged, water among others.

“This has been very difficult, even in government house most of the times we don’t have diesel to power generators, so we have to move to the office during office hours and when we move home, we use generator for the government house.

“It’s been very tough and that’s the position, but I can’t stop workers from going on strike, if you want to go on strike I can’t stop you, I can only give explanation which I have given and the best I could do is what I can do.

“So I sympathise with them but I am helpless, if you want to go on strike, we will be waiting when they will come back.”

The governor appealed to labour leaders to “see reasons with the present situation, it is a situation beyond anybody and everybody.

“If you go to Osun State, go to Ogun, go to Oyo, most states don’t even have commissioners, they don’t have means, so I won’t blame anybody, the financial situation I have said it long ago that this time shall come, this are very perilous times, difficult times, I share the pains of the common people in our society, it is not right time to be governor I must confess to you.”