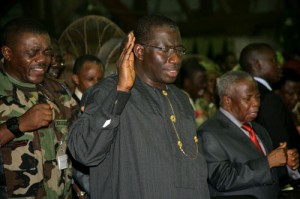 Rivers State chapter of the All Progressives Congress, APC, has urged President Goodluck Jonathan not to contest in the 2015 polls if he does not want to be disgraced by being voted out of office by Nigerians. The party warned that Jonathan will lose if he allows himself to be deceived into seeking re-election in the next year election.

This advice was contained in a statement issued in Port Harcourt by the party.

APC in Rivers State further advised the President not to bow to several pressures being mounted on him by selfish groups and individuals ahead of the presidential election in 2015.

“The handwriting is already on the wall for President Jonathan in view of the calibre of leaders and unprecedented masses that attended the historic declaration of General Muhammadu Buhari to contest the 2015 presidential election,” the party said in the statement signed by its Rivers State Chairman, Davies Ibiamu Ikanya.

Furthermore, the party submitted that it is “imperative for President Jonathan to start writing his handover notes as his game is up.”

“It is now clear why President Jonathan is scared and reluctant in accepting the call to contest the 2015 general election as evident in his recent statement: ‘In deciding on an appropriate response to such calls, I will place the greater interests of national harmony, cohesion, unity, security, political stability, progress, equity, justice and fairness above any personal ambition or sectional agenda.’

The party noted that, “if Dr Jonathan however succumbs to the pressure of haters of Nigeria to contest the 2015 general election, he should prepare to be the first sitting President to lose a general election since there is no basis whatsoever for him to win any election again as his record card shows that he is a failure.

ALSO READ  5 Spots You Must Experience In Abeokuta

“Today, Nigeria has never had it so bad as the present leadership under Jonathan has inflicted unimaginable suffering on Nigerians.”

“The Constitution of our country makes it clear that no one can enjoy three consecutive tenures as President and Jonathan is bound by the provisions of the Nigerian Constitution,” Ikanya declared.

“PDP’s reign these past fifteen years has brought shame and hardship to our nation and we must unite to salvage this nation from the hands of the present confused leaders of PDP,” he said.

“And I have said it again and again; there is no aspirant in APC that is not better than the aspirants in PDP. What we must do is not only to vote for the aspirants in support; we must also take the voters card so that when we finish nominating our candidate here, we will line behind that candidate and ensure that we will vote out Jonathan.”