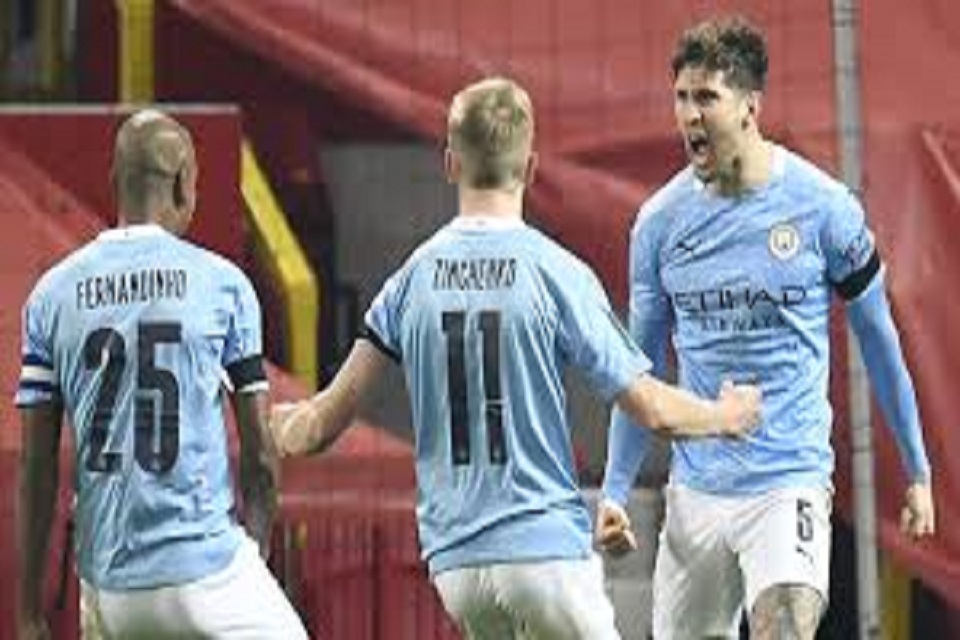 The second game of the Carabao Cup semi-final on Wednesday saw Manchester city defeating their United rival to book a place in the final against Tottemham.

Pep Guardiola’s side defeated Manchester United 2-0 at the same stage they did 12 months ago to reach a fourth consecutive League Cup final.

John Stones and Fernandinho were the unlikely goal scorers for Manchester City, who will now face Jose Mourinho’s Tottenham in the final at Wembley on April 25 after edging past their neighbours at an empty Old Trafford.

Despite having eight of their players tested positive for coronavirus since Christmas Day, City hardly looked like a team missing several key personnel as the visitors had 68 per cent possession over the first half of the game.

Though Solskjaer’s side had stood up well to the threat posed by the visitors but were undone by a free-kick in the 50th minute as Foden swung in the ball from the left and Stones got between Harry Maguire and Luke Shaw to score his first City goal since November 2017.

United could not find a way through a well-drilled City defence and Fernandinho settled it, firing home with his right foot from outside the penalty area following a De Bruyne’s corner from the right.

Guardiola who could not hide his happiness dedicated the win to the family of Colin Bell, a day after the City great died at the age of 74.

Bell had scored 152 goals in 492 appearances for City during a 13-year career in which he won five major trophies.

“It’s for him, for his family. This person helped build something special for this club. It’s an incredible victory for us to beat United away and to reach another final.

“You are frustrated when you play badly, when the team doesn’t run, don’t help, don’t celebrate every defensive action. It was an outstanding performance, we suffered a little bit because we were tired. When a team has the mentality to do it, we achieve something incredible. I know Carabao Cup is not Champions League but four times in a row is incredible.

“It’s not next week’s game, we’ll try to arrive at the final in as good condition as possible,” the City boss said.