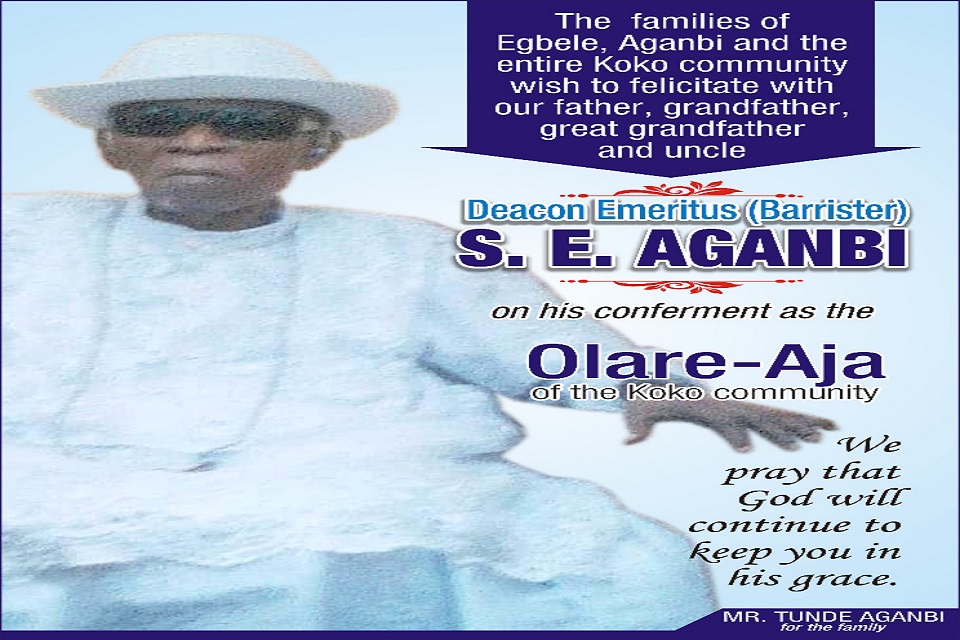 The Olare-Aja of Koko, Chief Stephen Ejueyetsetsi Aganbi, will be remembered as a modern and progressive community leader, a committed citizen and one of the most effective leaders in the history of Nigeria’s Second Republic. Aganbi died Tuesday night at the ripe age of 99 years.

“We have lost the unique focus of our community and festive light in our lives, but the inspiration of his self-confidence, cheerfulness and determination will live on in our hearts forever.”

The statement described Chief Stephen Aganbi as an icon of dedicated and upright public and private service, a man amongst men and one of the nation’s greatest political leaders.

Specifically, the statement praised Chief Aganbi for his roles in the unity and development of the country, particularly the Itsekiri nation.

“Chief Stephen Aganbi was a quintessential Nigerian. Throughout his political years, he proved to be an honest and courageous administrator. He also added charisma to education and astuteness both of which he displayed at difficult times,” business mogul, Mr. Felix Aganbi said.

Trained in the United Kingdom, the Second Republic Politician, lawyer, community leader and chairman of defunct Nigerian National Shrimp Company Limited, Oghara was on Tuesday, November 19, 2019 conferred the Alare Aja (community head) of Koko by the Olu of Warri, His Majesty, Ogiame Ikenwoli.

“Chief Stephen Aganbi dedicated his life to the empowerment of his people. His contribution to the history of the Itsekiri nation will never be forgotten,” Felix Aganbi said.

Before ascending the throne, the late community head had distinguished himself as a lawyer, politician and religious leader.

“Chief Stephen Aganbi was more than a political leader. He loved the company of children and younger persons. He was both a father-figure and mentor to people from all parts of the world. Indeed, he was a living legend. May his soul rest in eternal peace.”

The chieftain of the defunct National Party of Nigeria (NPN) recently decried the abandonment of some health care facilities in Warri North.

He called on DESOPADEC to develop all health care facilities in Koko.

Meanwhile, the member Representing Warri Federal Constituency in the House of Representatives, Hon. Thomas Ereyitomi on Wednesday paid glowing tribute to Aganbi who he said played key roles in the nation’s development.

He described Aganbi as a great man whose wealth of knowledge and advice will be greatly missed by all.

“Pa. Aganbi was a lawyer per excellence, a community leader and a lover of God,” the lawmaker said.

“We are encouraged and inspired by the example of Christian Service,” he said