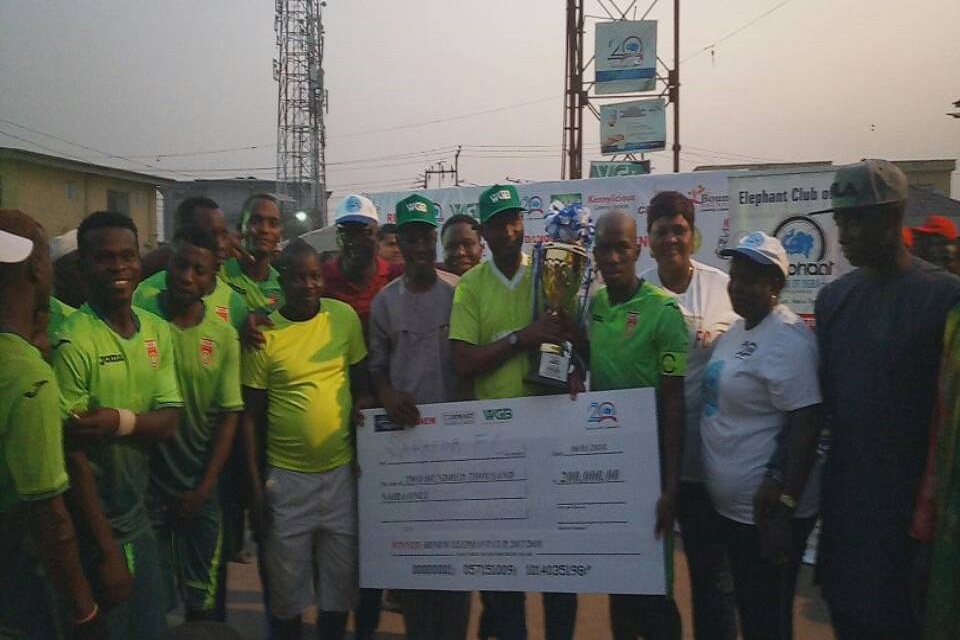 The famous Elephant Cup in Agege area of Lagos State recently received the massive backing of Winners Golden Bet, WGB, when the company sponsored the 20th edition of the football tournament.

WGB is one of the fledgeling sport-betting companies in Nigeria, which supports the development grassroots football in Lagos.

At the finals of the Renew-WGB Elephant Cup held on Friday, January 5, 2018 at the sprawling palace of Ologba of Ogbaland, Ogba Ashade, Agege, one of the local teams, Sarafina FC, defeated Unique FC of Agege 3-1 to reclaim the title.

The defending champion went two goals up within the first 15 minutes before Unique FC substitute player pulled one back in the first half of the game.

In the second half, Unique FC continued the pressure to level the game but Sarafina FC added another one later to seal the victory.

Addressing journalists at the venue of the competition, the Assistant General Manager (Marketing), Winners Golden Bet (WGB), Mrs Popoola Patricia, said the company priority is grassroots sports “at WGB, we are actually supporting grassroots sports and we are also grooming future champions, with time you will find out Nigeria will be having champions through this type of programs.”

According to her, “We love this environment because they bet on our platform and this is the best way we can give back to them which you can see they are very happy.”

She explained further that WGB has been sponsoring Lagos FA Cup since they came on board till date.

The 20th edition of the football tournament witnessed by mammoth crowd where live performances from various artists, comedians, DJ Horpse and other special attractions as well as full security by Nigerian Army.