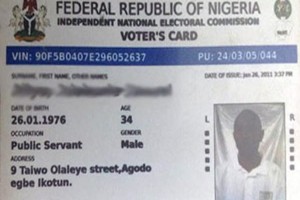 The recently concluded distribution of Permanent Voters Card, PVC, by the Independent National Electoral Commission, INEC, in 11 local government areas of Lagos State was not without some hitches.

Due to several flaws recorded during the exercise, which made it impossible for some eligible and registered voters to collect their cards, the Lagos State government has set aside five dedicated phone numbers to receive complaints from the affect persons.

Lagos State Commissioner for Information and Strategy, Lateef Ibirogba, in a press statement issued on Wednesday, advised those who are yet to get their cards to communicate complaints to the numbers by text message only.

Ibirogba said this is to enable the government have information regarding problems experienced during the exercise. He noted that the numbers are toll free lines, promising that complaints received from the affected persons would serve as avenues for public enlightenment.

He further advised those yet to pick up their cards to go to the INEC offices in the 11 local governments.