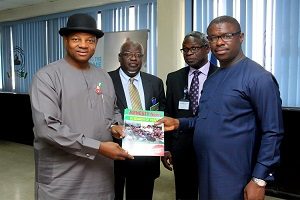 Special Adviser to the President on Niger Delta Affairs and Coordinator of the Presidential Amnesty Programme, Brigadier General Paul Boroh (Rtd) has stepped up his resolve to finding a lasting solution to the restiveness in the Niger Delta region.

Focusing on the training, engagement and reintegration of ‎the 30,000 former agitators is one major strategy the amnesty office is using to secure peace and stability in the region.

On Tuesday, December 13, 2016, Boroh and a small delegation paid a courtesy call on the Director General of the Nigerian Maritime Administration and Safety Agency, NIMASA, Dakuku Peterside, in the National Headquarters of the agency in Lagos. Top on the agenda was the proposed partnership of the both agencies.

Boroh, in his remarks, called for collaborative efforts in the resettlement and reintegration of the ex-agitators in the Niger Delta Region, noting that it would foster the growth and development of the economy.

He also highlighted that the Amnesty Office has trained ‎1325 ex-agitators in various Maritime courses, and pleaded that NIMASA as a brother agency, take up the responsibility of engaging these skilled youths as a means of resolving the unrest in the Niger Delta.

In his words “Both our agencies have a similar responsibility of ensuring stability in the Niger Delta, especially in the water ways, where most of these boys reside. We have invested a lot in training these boys, and ask that NIMASA come to our aid by engaging the few, skilled in Maritime related fields.”

In his response, the NIMASA DG, Dakuku Peterside, commended Boroh for his apolitical approach to handling the activities of the Amnesty Office. He acknowledged the need for synergy amongst the two agencies and committed to a well organised partnership between the two agencies.

‎Peterside also said that the agency would set up a special desk to look at the young men and women in the amnesty programme.

He said the special desk would be set up with a view to creating opportunities for them to apply the skills they acquired in the maritime industry.