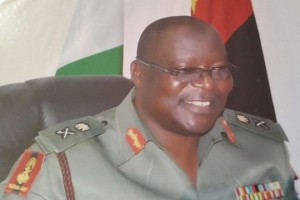 A top brass of the Nigerian Army has been confirmed dead after he was involved in a fatal auto accident along the Damaturu/Maiduguri road in Yobe State on Tuesday.

The victim, Major-General Yusha’u Mahmood Abubakar, was the Chief of Training and Operations of the Nigerian Army.

He was also the former Commander of Operation Lafiye Dole, which fought the Boko Haram terrorist group in the north east.

Also involved in the road mishap is the Acting General Officer Commanding, GOC, 3 Division of the Nigerian Army, Brigadier-General MSA Aliyu, although he survived the crash and he is receiving treatment.

The Army in a statement confirmed the incident.

“The Nigerian Army wishes to inform the public of the involvement of its Chief of Training and Operations (Army), Major General Yusha’u Mahmood Abubakar and the Acting General Officer Commanding 3 Division Nigerian Army, Brigadier General MSA Aliyu in a road traffic accident along Maiduguri-Damaturu road today.

ALSO READ  Six Festival Hacks To Spice up Your Experience

“Regrettably, we lost Major General Yusha’u Abubakar at the incident, while Brigadier General Aliyu sustained some injuries and is receiving treatment,” the statement said.