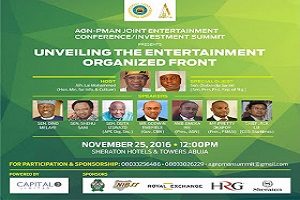 The Nigerian entertainment industry is a significant contributor to the nation’s economy. In Music industry alone, they produced an average of 2000 albums of different types of music annually.

Record sales have more than tripled in the past recent years, averaging 10 million in 2005 and rising to an estimated 50 million in 2010.

Combined total revenues from all sources are estimated atover $200 million.

The Nigerian film industry, also known as Nollywood, produces about 50 movies per week, second only to India’s Bollywood-more than Hollywood in the United States.

Although its revenues are not on par with Bollywoid’s and Hollywood’s, Nollywood still generates an impresdive $590 million annually.

The conference and the investment Summit will take place on 25th of November 2016 in Sheraton Hotels & Towers Abuja.

The event is to be hosted by Minister for Information & Culture, Alhaji Lai Mohammed.

The Entertainment Conference and Summit is the first of its kind powered by CAPITAL Limited, Sponsored by Royal Exchange, HRG, NIBSS, Federal Government of Nigeria and Sheraton.