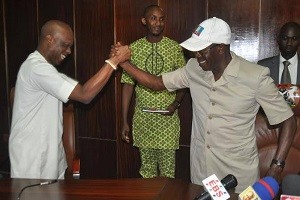 Edo State governor, Adams Oshiomhole, has reconciled with his deputy, Pius Odubu, ahead of the September 10, 2016 governorship election in the state.

The two political gladiators, we gathered, agreed to sheath their swords so as to join forces for the victory of Godwin Obaseki, candidate of the All Progressives Congress, APC, in the gubernatorial poll.

Oshiomhole and Odubu were both present at a stakeholders’ meeting of the APC held at the Government House, Benin City, where issues between them were tabled down and resolved amicably.

“For some time, it has been in the news that the Deputy Governor and I, and I believe the watchers of Nigeria’s politics will agree, that Pius and I have had an extremely cordial relationship. And I had without any prompting, said again and again in several quarters that working with Pius, I found him to be absolutely loyal, dedicated and committed.

“Nobody was able to infiltrate us, and to our mutual record, nobody ever came to settle a quarrel between the Deputy Governor and I over the past seven and half years.

“Sometimes when we joke, whether in public or private, we don’t relate as boss – subordinate. We relate as brothers that we have been.”

“Pius and I fought many battles, both political battles and battles to reposition this government, and together we can effortlessly point at what our stewardship accomplished for the benefit of the people of Edo State, which I believe necessarily forms the foundation for electioneering campaign that is about to begin. Having worked so hard, and related so closely, there is no question, Pius and I, in or out of government will remain friends, brothers and comrades,” he further said.

Continuing, Oshiomhole said, “The internal primaries have come and gone. We all knew that even if all twelve were angels, only one angel was required, and in choosing that one angel nobody needs to give reasons why you prefer one angel to another. And that is simply what has played out in our party.

“But I acknowledge the fact that in the course of the tension, statements were made, some fairly, some unfairly. As a Governor, at a point, I took some decisions some of which clearly affected some of the supporters of my brother, the Deputy Governor.

“In line with the spirit of our party and the desire of our people and the prescription of common sense and the teachings of our own religion, both of us being Catholics; in our daily prayer we say among other things, forgive me my trespasses as we forgive those who trespass against me.

“To actualize this, if Pius has wronged me in any way, I have already forgiven him, and he too has told me he has also forgiven me, but he has the opportunity to speak for himself. And as part of the demonstration of this total reconciliation and reunion, and sheer commitment to maintain the unity of our party, which since 2008 against all odds overthrew the then Peoples Democratic Party, what God has put together, internal party primaries will never put asunder.”

“As part of my own atonement, and to demonstrate my commitment to our friendship and our conviviality, which characterize our working together for the past seven and half years or even nine years, some of the people who were affected in the course of this contestation, I have decided to re-engage, to reinstate them to their former positions wherever that was possible and even to get their remuneration restored as if they were never removed,” he disclosed.

In his remarks, Odubu stressed that, “Yesterday belongs to the past, and we have decided to put the past behind us. Today is another day, and I want to in the presence of my father here and everybody here present reaffirm my commitment to this party APC and to its victory at all elections.

“We will work even harder than we have ever worked, because anybody who has occupied any office like a proud father will want to leave a successor behind. We want to leave with our party APC remaining in government.”

According to Odubu, “I thank all those who have shown concern all these months over what has been happening. Political contestation is in the realm of politics. I told my people from the beginning that we must be civil, that there will be one winner at the end of the day. We have gone through it all and there is one winner. And as a loyal party man, I am committed to working for the success of the party and our candidate.”

Odubu added, “I want to appreciate you, Mr Governor for taking back those that were sacked, and I am sure their families will be happy.”

In his remarks, the State Chairman of the APC, Barr. Anselm Ojezua expressed delight for the full reconciliation of all party members and expressed optimism that victory was certain for the APC with this reconciliation.