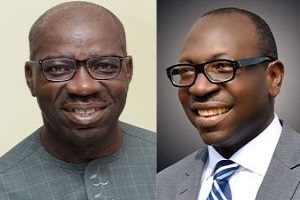 Flag bearer of the All Progressives Congress, APC, in the September 10 Edo governorship elections, Godwin Obaseki, emerged as the clear winner from the gubernatorial debate organized by Channels Television between the candidates in the governorship race – ahead of Osagie Ize-Iyamu, the factional candidate of the major opposition, Peoples’ Democratic Party, PDP.

According to those present in the audience, Obaseki was the most outstanding of the four runners in the 90-minute televised debate from Best Western Hotel, Benin City.

He exuded confidence as he expertly responded to a series of questions ranging from how he would tackle the problem of insecurity in the state; plans to diversify and significantly boost the economy of Edo; and steps to tackle unemployment and create 200,000 jobs in four years.

The consensus among young people who watched the debate was summed up by 21-year old Joy Iredia, a student of the University of Benin: “Up until now I did not take much interest in politics. But listening to all the candidates speak, I was drawn in by the candidate of the APC, Godwin Obaseki, and how kept his focus on the issues and articulated his plans to take Edo State forward, particularly the use of technology as a tool for effective governance and job creation.”

On his part, Osahon Bello, a civil servant, said, “The civil service forms the major workforce in Edo State. I align with Obaseki’s plan to restructure the civil service in order to be more efficient and productive through robust training strategies to meet the challenges of fostering strong, sustainable and balanced economic growth.”

Obaseki, a renowned investment banker and wealth management expert of over 30 years repute, posited that the economic challenges confronting us as a people today are so complex that it takes someone with a full grasp of all the issues, and practical experience in solving complex economic problems to lead the state on the path to prosperity.

The APC flag bearer noted, “The world is set for the Fourth Industrial Revolution. We have identified the cycles and markers and we are prepared to play our part in this forward shift in the gears, ideologically opposed to being left behind. Our vision is a modern and progressive Edo State where every citizen is empowered with opportunity to live life in its fullness.”

In his closing remark, Obaseki assured of better days ahead for Edo people, promising that his will be a people-oriented and inclusive government. He appealed to the electorate to support his bid by voting massively for the APC come September 10.