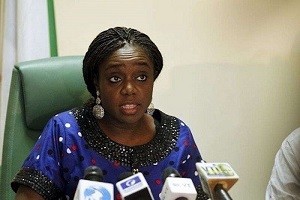 In the face of the precarious state of the Nigerian economy, especially unpaid salaries of workers in the states, the Federal Government on Tuesday announced another loan package of N90 billion for states.

This is coming some 18 months after over N500 billion was dispensed as financial bailout to 27 states facing financial challenges.

A bond is a debt investment in which an investor loans money to an entity (typically corporate or governmental), which borrows the funds for a defined period of time at a variable or fixed interest rate.

While the July 2015 bailout had no condition attached, the N90 billion loan package announced on Tuesday by the Minister of Finance, Mrs Kemi Adeosun, which would be accessed through bond, comes with 22 stringent conditions that states must meet before they access the funds.

She spoke to journalists after a closed-door session with states’ commissioners for finance. The minister explained that the state governors had been earlier briefed on the Fiscal Sustainability Plan (FSP) at a separate session.

The new package is coming on the heels of states’ indebtedness to the state civil servants and local contractors. Currently, the Federal Government is borrowing an average of N600 billion annually to augment payment of workers’ salaries.

Shedding more light on the package, the Finance Minister said the loan would come in two tranches – N50 billion for three months to be shared across all the participating 36 states, and N40 billion for nine months. Each state would get an average of about N1.6 billion, she said.

Explaining that the fresh N90 billion package is not a bailout, but a repayable loan, Adeosun said the overall aim of FSP is to support states to overcome current fiscal challenges whilst reforming financial management to ensure their long-term viability.

The five key strategic objectives of FSP listed by the minister, which states desirous of accessing the loan must possess include, improvement in accountability and transparency, increase in public revenue, rationalisation of public expenditure to improve public financial management and sustainable debt management.

The minister said: “The first thing to say is that this is not a bailout. It is very important everybody understands this. It is definitely not a bailout. The bailout was done last year July and there were no conditions attached.

This is a loan we have secured from the private sector and it has conditions attached to it.

“So, it is actually a loan to be repaid and not a bailout. What I mean by paying the price is that when you want to borrow money, the lender sets some conditions and these conditions are very stringent. There are 22 of them and I think all of you have the fiscal sustainability plan. “Government unanimously approved the plan and you know it is going to involve a lot of work.

“What I mean by paying the price is, governors and commissioners believe that these reforms are necessary if they want the reforms to be fiscally sustainable,” she said. On whether government has imbibed the spirit of fiscal federalism with the new stance that each state must develop ways of self-sustenance, she said: “Every state must be viable.

“We cannot have a situation where states are sole dependent on the federation account. Once the federation account is down, they cannot survive. We have to make sure that within each state, whatever local advantage they have, they exploit it. So, if they have private sector, for example, they can collect taxes from them, if there is none, there is agricultural produce, which can be exploited and the states can use that to generate revenue.

“Maybe there is natural resources, which can be exploited and the states can use that to generate revenue. What we are saying is that every single state is a centre of prosperity. Every state should go and look for what and what to exploit to improve its internally generated revenue.

“State must be disciplined to make sure it can pay its own salaries, clean out ghost workers, remove wasteful spending so that as the economy improves, governance also improves. There are no federal people.

Everybody lives in a state. So, every state has to be viable and that is what fiscal sustainability plan will do.” Adeosun said the government recognised the critical importance of developing a broad-based economy, with productive activities in every region and state.

She said: “We must ensure that the necessary conditions for growth are firmly put in place. We are working to achieve this through investment in enabling infrastructure and reforms in the ease of doing business, which will spur growth and development in the private, as well as public sectors.

“At federal level, to create headroom for the urgently needed investment in infrastructure, we are pursuing a very disciplined approach to managing public funds, ensuring the maximisation of revenues and the minimisation of the costs of governance.” The minister said the adoption of FSP by states would replicate the farreaching public financial management reform programme across all tiers of government, a development she said would mark a turning point in the management of state finances.

By raising the standard for public financial management in the areas of transparency, accountability and efficiency, states will be repositioned to embark on a path towards fiscal independence, she added.

On the cost side, she said: “The pressure is to cut costs, starting with the commitment to eliminate, once and for all the menace of ghost workers by BVN checking of payroll and the requirement that all salary payments are made directly to the individual accounts. This will enable states to control the size of their wage bill and ensure that it is affordable.

The formal commitments being made to improve expense management, greater efficiency in recurrent spending and prudent debt management, will combine to ensure that states can move towards improved long term financial health.”

Responding on behalf of the state commissioners, Jigawa State Commissioner for Finance, Mallam Umar Namadi, pledged states’ readiness to key into FSP project. He described FSP as the only viable option that will remove states from their present financial predicament.