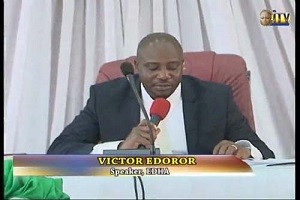 Speaker of the Edo State House of Assembly, Victor Edoror, has been sacked, Aproko247 has been reliably informed.

Our source in Edo State disclosed to us that the Deputy Speaker of the Assembly, Festus Ebea, was also impeached.

It was learnt that both members of the hollowed chamber were impeached on Tuesday.

It is however not clear why the Speaker and his Deputy were removed from office by the Assembly, which has been in crisis recently.

Also, the Edo State chapter of the All Progressives Congress, APC, has been battling with issues in recent times.

The state governor, Adams Oshiomhole has been at loggerheads with his deputy.