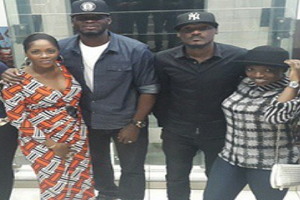 Top Nigerian singer, Innocent Idibia, otherwise known as 2Face, has expressed frustration over the way some Nigerians have made jokes out of the marriage crisis rocking his close family friends, Tiwa Savage and Tunji Balogun, also known as Tee Billz.

2Baba, as the multi-award winning hip-hop musician loves to be addressed now, cautioned Nigerians against making distasteful jokes from the saga.

The Hypertek Records boss took to his Twitter page on Sunday to apparently speak on the issue.

He said, “I’m so disgusted at some people that have been making distasteful jokes out of people’s real life heartbreaking predicament. GOD forgive u.”

It would be recalled that Tee Billz took to Instagram on Thursday morning to accuse his estranged wife, Tiwa Savage, of sleeping with 2Face, Don Jazzy and Dr Sid.

ALSO READ  Why I Dumped Telecoms For Acting—Genny Uzoma

He also attempted to jump off the Lekki/Ikoyi bridge in Lagos.

However, Tiwa Savage denied the accusations via a 45-minute interview.