Amaechi Should Not Resign Now—PDP 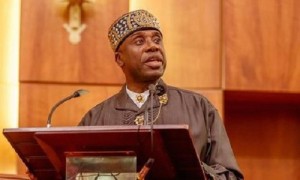 Minister of Transport, Rotimi Amaechi, has been urged by the Rivers State chapter of the Peoples Democratic Party, PDP, not to resign from office as requested by the National Assembly.

The former Rivers governor was asked to apologise or resign by the legislature following the controversy surrounding the Lagos-Calabar railway project.

In a statement issued in Port Harcourt on Tuesday by the Rivers PDP, the party said its decision is based on the high regard the All Progressives Congress, APC led federal government has for Amaechi as an indispensable asset and his taunted closeness to the Presidency.

In the press release signed by its Chairman, Felix Obuah, the party further said it is too early to fight with their former member and wondered why a mere controversy over a ministry’s budget that is an infinitesimal part of the 2016 budget proposal should warrant his resignation.

“We believe it’s rather too early to begin to quarrel with Rotimi Amaechi or call for his resignation when he is yet to fix the Nigeria he promised would be changed by his new found love, the almighty APC in matter of months,” the PDP Chairman said.

Obuah stressed that, “Again, Amaechi remains our beloved son who said he single-handedly sponsored and made His Excellency, Muhammadu Buhari, President and he is yet to recoup the billions of Rivers money he invested into the project.

“Amaechi also said he planned to construct the controversial Lagos-Calabar rail line modernization project to empower the APC members in the South-South.

“This lofty dream will not be actualized if he resigns now.”

Obuah pointed out that “though the National Assembly members may feel hurt by Amaechi’s ingratitude after it had accepted to deliberate over the later included supplementary budget which he later went public to claim was contained in the original budget proposal, thereby portraying the federal lawmakers as partial and discriminatory, the main reason for Amaechi’s mischief was to create the impression that he has the interest of the South/South people at heart which is a fallacy.”

He said further that, “I am happy that Amaechi has carried his antics of setting brother against brother to the very Senate that screened and confirmed his ministerial appointment.

“I want the lawmakers to use same to reflect on all the submissions by not only the PDP, but also the people, the civil society and concerned citizens etc, before they went on to confirm his (Amaechi) appointment despite several allegations of corruption and breaches of the Rule of law by Amaechi.

“This is the kind of falsehood, mischief and misrepresentation we have been contending with, from Chibuike Amaechi which his allies and the All Progressives Congress, APC have continued to deny and good a thing, he is now exhibiting same character to his appointees and this is just the beginning.”

“The issue is not whether or not Amaechi should resign as a minister or tender apology to the National Assembly, but this should serve as an eye opener and a pointer to the crisis he (Amaechi) instigated in Rivers State that brought about the panel of inquiry that indicted him of a myriad of alleged corrupt practices and fraudulent engagements while he served as governor in Rivers State for eight solid years.

“We have said it times without number that Amaechi cannot change his true colour under President Buhari and must remain a cog in the wheel of progress.

“His early resignation will hardly free the APC members and the unrepentant Amaechi apologists from the world of theories which is not good for the country.

“The taste of the pudding they say, is in the eating, while experience remains the best teacher. Please let Amaechi be,” he concluded.