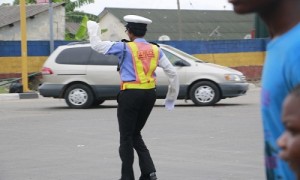 Reports say a Divisional Police Officer, DPO, in Ogun State allegedly a female traffic officer for having the effrontery to stop his car.

It was gathered that the DPO, Patrick Onwu, who is in charge of Ikenne Division, pounced on the female traffic warden, Inspector Anifat Bello, when his private car was stopped after he allegedly drove against traffic.

Onwu was said to be in mufti when the incident occurred.

He was said to have driven into a nearby filling station in anger, parked, changed into a police uniform and beat the woman into coma.

It was learnt that Anifat Bello has been severally honored for her dedication to duty.

Police Public Relations Officer in the state, Muyiwa Adejobi, who confirmed the ugly incident, said the Commissioner of Police was unhappy about it and had directed that the matter be thoroughly investigated.

“The woman traffic officer has reported the matter to the CP and he has directed that the matter be thoroughly investigated. The CP was not happy when the woman came with a swollen face. If the allegation is true, I am very sure the CP will know what to do,” Adejobi disclosed.