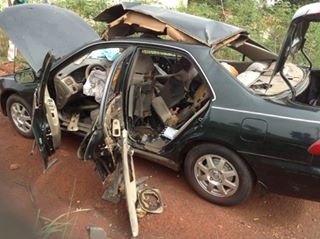 A car bomb attack occurred on Saturday morning at a polling unit in Enugu State, though no life was lost.

It was gathered that a black colour Honda baby boy car. with registration number KUJ 971 LB, driven by yet to be identified persons and allegedly with some suspected Improvise Explosive Device, IED, exploded, shattering the said vehicle on the road behind the polling station.

However, it took the prompt intervention of the anti bomb squad of the Enugu State Police Command to detonate the remaining explosives.

Meanwhile, Commissioner of Police in the state, Dan Bature and other heads of sister security agencies were also at the scene to assure voters and members of the public about the readiness of the security agencies.