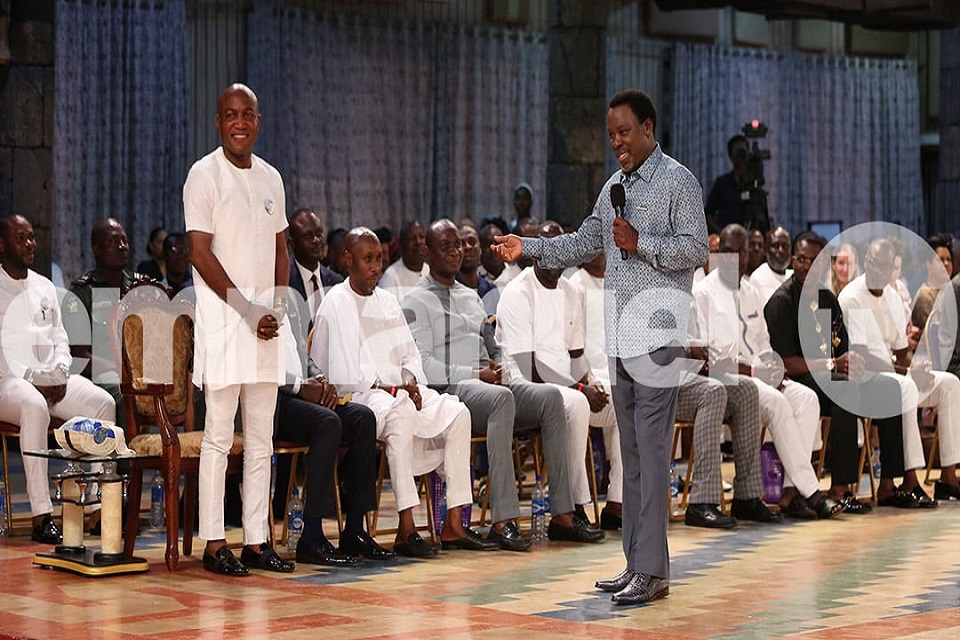 Governor Elect of Bayelsa State, David Lyon, on Sunday paid a courtesy visit to Prophet T.B. Joshua at the Synagogue Church Of All Nations (SCOAN) located in the Ikotun area of Lagos State.

A statement from the media consultant to the man of God disclosed that the Governor-elect was in Lagos to show appreciation to God’s goodness upon his life through the ministry of SCOAN.

In an atmosphere of faith and expectation, T.B. Joshua entered the altar and proceeded to recognize the presence of the David Lyon, who was decked in a white attire with his entourage in The SCOAN Live Sunday Service yesterday.

While giving him a charge, T.B. Joshua admonished him to meet the expectations of his people who voted him.

“He is not a new person to us because he is a brethren. He has been a staunch believer in the blood of Jesus.  I know God will use him,” the reputable cleric said to Lyon during the service.

Speaking further, he said, “I want you to know that the only way Bayelsa people will believe you are the one they voted for is for you to meet the expectations of the Bayelsa People.”

Charging the congregation too, the man of God said they should remember him in their prayers, saying, “He is banking on our prayers because the best is yet to come.”

Finally, he told the governor-elect that he has a word of wisdom for him, stating that, “I am at your service. By that, I meant I will make sure the expectations of the Bayelsa people are executed.

“I have a word of wisdom for you. It is better to live purely upon the fruit of God’s goodness than to live plentifully upon the product of our sin,” he added.

It would be recalled that David Lyon was declared winner of the just-concluded gubernatorial election in Bayelsa State by the Independent National Electoral Commission (INEC) on Sunday, November 17, 2019.

Lyon of the All Progressives Congress (APC) will succeed the outgoing Governor Seriake Dickson, who has ruled the state since 2012