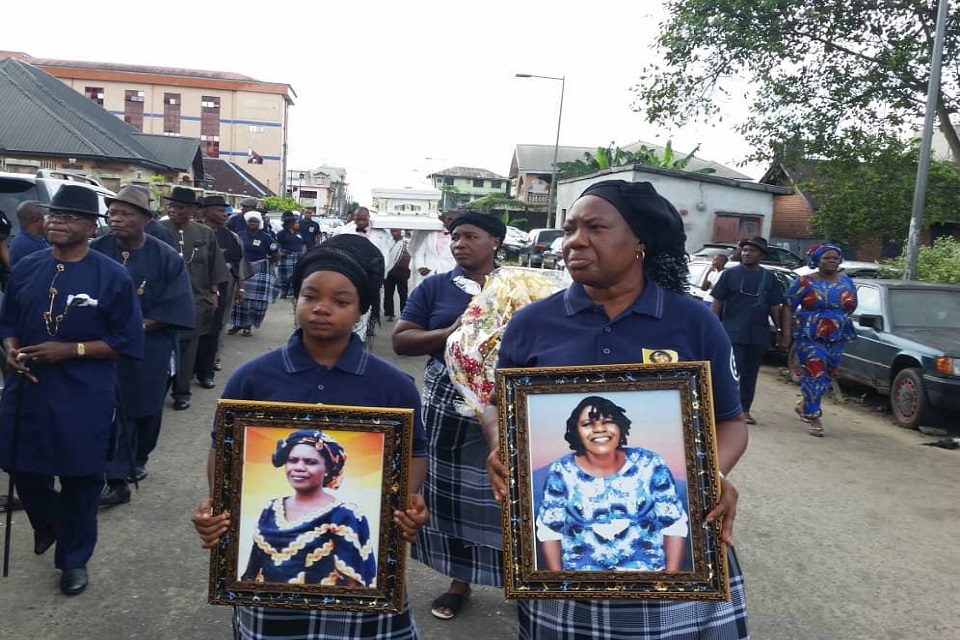 In what could be described as a combination of tears and sorrow, the Prince of the Niger Delta as he is commonly referred, laid his older sister, Pastor Meg Mike Ifijeh to rest at the PH cemetery, led by his older brothers and his one remaining sister in the presence of their family, friends and a host of well wishers.

Pastor Meg who spent her entire working life at Union Bank was known for her fierce love of God and her ever constant smile. It would be the words of the officiating Minister that would set the tone for the day as Archbishop F E Gideon reminded the congregation that life was like vapour, here the one minute and gone in the next. What matters he said is that “one does not end up being a loss to Christ and a gain to the devil”. With Meg he said, those who knew her know, that she’s a gain for Christ. Testimonials were also shared from her co-workers at Union Bank, her family members and from her church members, speaking of her flawless character and her wonderful heart, while her younger brother the Prince read out her rich biography to the amazement of the crowd.

After final respects, the body was escorted to the graveside like clockwork at 12 noon led by the family where they all said their final goodbyes.

Speaking at the graveside, Prince Tonye Princewill, who spoke on behalf of the family, told a large cross section of the media that we were all witnessing the passing of a giant to the great beyond. One of our few true greats. “She may have been the fifth of 6, but she was like a mother to us all. Considering we have a Professor, a medical doctor, a retired and highly decorated security officer and a top architect amongst us, that is no mean feat. All my siblings are leaders in their chosen field. Yet she was still our cover.”

In his tribute to his beloved sister, Princewill noted that, “usually people have a father and a mother. I had four fathers and three mothers. I am the youngest of the best siblings any man could have and I was loved beyond limit by all of them, so much so that my brothers and sisters were actually my fathers and mothers. They made me. My brothers taught me to be street wise and book smart, while my sisters taught me to be kind and to have a conscience. They are all an example of what they taught me. Lesson learnt.

“That’s why losing my sister is like losing my mother all over again. The pain is unbearable and the loss irreplaceable to me. Who will call me to ask me if I’ve eaten? Who worries more about myself than she does herself. Who can deny herself sleep and pray for me while I lay fast asleep wherever duty takes me. I took you for granted in thinking that you will always be around, if not forever, for a very, very long time. I was wrong. Very wrong. Another lesson learnt.

“So, in writing this tribute I vow to live up to the man you brought me up to be. To respect my elders, care for all and put God first in all I do. Your life was not in vain and your legacy will live way beyond you. My one consolation is that you have gone to keep mummy company and we now have two angels looking down on us. Rosemary, Azariah, Teetee and Teepee loved you too. Goodbye, till we meet again. Rest easy. It is well.”

Pastor Meg Mike Ifijeh was 58 and is survived by a husband, an adopted daughter and five siblings.