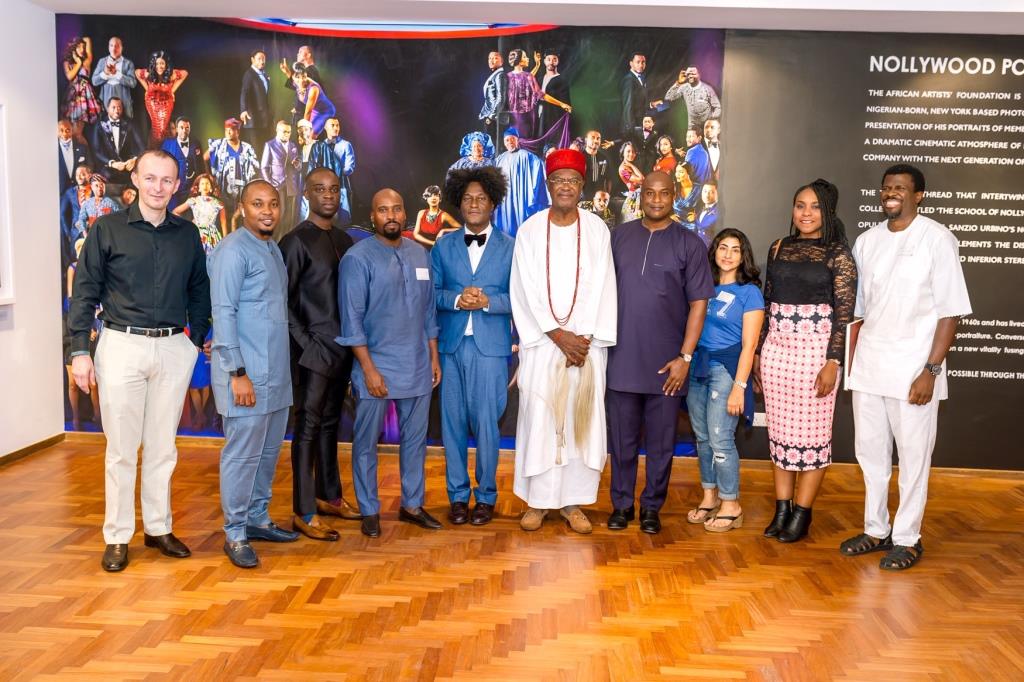 The monarch made the approbation when he led members of his alma mater, Columbia Business School’s Alumni Club of Nigeria to visit the exhibition currently open to the public at Alliance Française de Lagos / Mike Adenuga Centre, 9, Osborne Road, Ikoyi, Lagos. The exhibition is scheduled to end on Sunday 16 June 2019.

The visit of the monarch and other corporate titans was on the heels of an ‘Evening of Art and Conversation’ organized by his alma mater, Columbia Business School’s Alumni Club of Nigeria in association with Columbia University’s Alumni Club.

In attendance were the institution’s alumni in various fields including banking, finance, private equity, academia, museum management and others. They all enjoyed private conversations with the artist while appreciating the body of work that graced the walls of Alliance Française de Lagos.

Speaking during the visit, the President of the Columbia Business School Alumni Club of Nigeria, Osahon Akpata, said: “We are pleased to be able to host an art event where our alumni get to interact with a leading contemporary African artist, Iké Udé His attention to detail in portraying these icons in his signature, elegant style is commendable.”

While further expressing his appreciation to Iké Udé for his spectacular and works of art, he commended him for choosing to be a positive voice for Africa in the world arena.

“With the works of portraiture, Udé is making a bold statement in the discourse about representation of Africans, from the safari perspective to a more modern image of our people. By creating this museum-quality body of work, he is taking beautiful images of Africans to the highest art and cultural institutions, where they may be referred to for centuries on end.”

Expressing his appreciation for the visit of the Obi to the exhibition, the artist, Iké Udé said, “I am indeed honoured by the august visit of the Obi of Onitsha to the Nollywood Portraits exhibition. I admire his commitment to the development of the arts in Nigeria and would like to encourage others in leadership of government and private sectors to do the same.”

Iké Udé was born in Nigeria in 1960s and has lived in New York City, NY for over three decades. He is best known for his conceptual photographic portraits and self-portraiture. Conversant with the world of fashion and celebrity, Udé gives conceptual aspects of performance and representation a new vitality, fusing his theatrical selves and multiple personae with his creative practice.

His works have been widely exhibited and collected both privately and by institutions, including the Solomon R. Guggenheim Museum, Smithsonian Institution and the Minneapolis Institute of Arts. Mr. Udé is author of Nollywood Portraits: A Radical Beauty (Skira, 2016), Style Files: The World’s Most Elegantly Dressed (Harper Collins, 2008) and Beyond Decorum (MIT Press, 2000) and was publisher of the seminal international magazine, aRUDE between 1995 and 2009. He was a 2017 TED Global speaker and has featured on the coveted Vanity Fair International Best Dressed List three times. He lives and works in New York in the US.