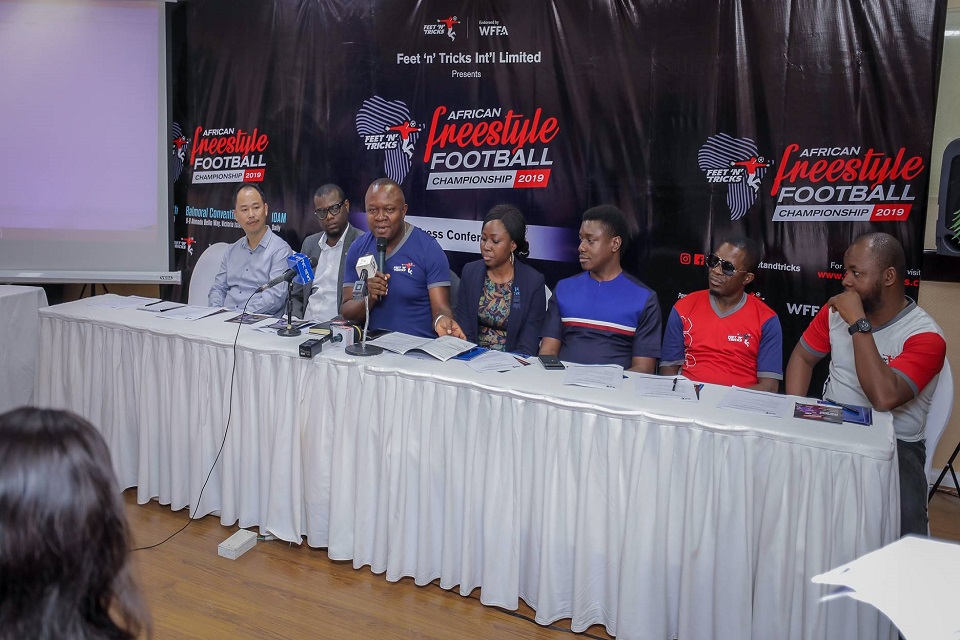 Chairman of Feet ‘n’ Tricks, Mr. Valentine Ozigbo disclosed this during the press conference held at the Federal Palace Hotel to herald the 2019 edition of the African Freestyle Football Championship

The championship began in 2017, and the 2018 edition hosted a list of sponsors including: MTN Nigeria, Heritage Bank, GAC Motors, Sprite, Startimes, Federal Inland Revenue Service (FIRS), Eko Disco, amongst others and was laced with a row of exciting freestyle football activities.

Freestyle football is described by the WFFA as “the art and sport of juggling a football using all parts of the body to entertain audiences and outperform opponents; a fusion of tricks with a ball, dance and music.”

Registration for this year’s tournament is currently open to both male and female freestylers of African descent who wish to attend, and registration can be done via the company’s website www.feetandtricks.com.

According to Ozigbo, the Nigerian contestants will be shortlisted through four (4) Regional Championships that will be hosted in Lagos, Warri, Owerri and Abuja in June and July this year, at the following venues and dates – at Rowe Park Yaba, Lagos on June 22; Brownhill Event Centre, Warri, on June 30th; Cubana Lounge, Owerri on July 6th and at the Central Park, Abuja on July 13th.

The shortlisted participants who emerge from the qualifying rounds will contest at the finals which will hold between September 14th and 15th, 2019, at the Balmoral Convention Centre, Federal Palace Hotel in Lagos.

For other contestants from other parts of Africa, all they need to do is register directly for the Championship in September and they will be advised the rest of the processes. The African male and female Freestyle Football Champions would thereafter be selected.

“We are excited to have started the drive to pave a new direction for freestyle football in Africa. “In this year’s edition, we expect at least 30 African countries to be represented at this Championship as many have already registered. We will work on the continuous development of African freestyle talent and continually exploit all available resources to create more awareness for the sport and we are grateful to our sponsors and partners. This year, we will be introducing Panna game in the competition to further excite the audience and promote the totality of freestyle” Ozigbo said.

Congratulating the Feet n Tricks team, Daniel Wood, Co-founder and Head of Global Partnerships, World Freestyle Football Association (WFFA) said, “Feet n Tricks have proven that they can produce world class events and we are so excited to be extending our partnership. We are fully committed to creating opportunities for young people and this event is to be the focus point for our sport in the continent of Africa.”

The Championship this year will be covered live by Startimes in 30 countries in Africa where they are present and also on their digital channels. There will also be a host of other media partners at the events.

Freestyle football is one of the fastest growing aspects of the soccer game worldwide. Just this year, WFFA in partnership with #WePlayStrong will host the first-ever WFFA European Freestyle Football Championships in Budapest at the UEFA Women’s Champions League Final.