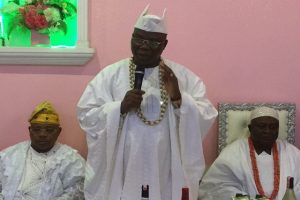 Paramount Yoruba traditional ruler, the Alaafin of Oyo, Oba Lamidi Adeyemi, on Saturday solicited support for the Aare Ona Kakanfo designate, Dr Gani Adams whom he described as the symbol of Yoruba unity.

According to the monarch, the Oodua Peoples’ Congress, OPC, chieftain has done his own bit in addressing the division among the Yoruba race by doing what the people wanted in giving them the Aare Ona Kakanfo of their choice.

He said it is now left to the people to give the Aare the necessary support that will make him deliver on his mandate.

Speaking in his palace during a thank you visit by the Aare Ona Kakanfo which coincided with a christening ceremony in the palace, Alaafin posited that the core of the Aare assignment is to unify the Yoruba race so that its citizens could carry on in one accord.

He expressed his joy over his choice of Gani Adams as the Yoruba Generalissimo, declaring that the accolades he has received over the issue have been overwhelming.

As at the last count he said, about 600 congratulatory letters have been received by the palace over the choice of Adams as Kakanfo, adding that he had to delete such message on his handset when there was no space anymore to accommodate them.

Remarking that so many futile efforts have been made in the past to foster unity among Yorubas, Alaafin said the 15th Aare Ona Kakanfo’s major assignment is to unite the entire race, adding that the importance of this assignment necessitated the proclamation of an Aare Ona Kakanfo at this time.

According to the monarch, the Aare Ona Kakanfo has a duty to the entire Yoruba land , even as he  registered that Adams was born great and destined to be great.

He stressed that God only used him as the catalyst to bring him to a greater level of his greatness, through the title.

This, he said, is the reason the entire race must rally round him to ensure that he doesn’t fail.

Informing that he had received over 150 congratulatory messages since the proclamation, Adams said every palace he has visited since the proclamation have been very receptive, adding that the  title has given him ” another picture of the Yoruba race which suggests that there is so much work to do”

Also present at the event, Hon Hakeem Ige of the Oyo state House of Assembly thanked Alaafin on behalf of the entire house and the people Of Oyo for the choice of Adams as the Aare Ona Kakanfo.

Market women from Ondo North Senatorial District were also on hand to thank the Alaafin for counting their son worthy of the Aare Ona Kakanfo title.