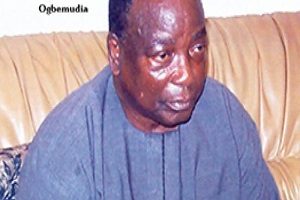 In a condolence message to the family, Igbuya applauded Ogbemudia’s efforts in the improvement of sports, urban development, education, public transportation, housing and commerce in defunct Bendel State.

“Ogbemudia was an honest man, an extraordinary politician, a great leader and a man of principle. From 1957 when he joined the Nigerian Army to the day he died, Ogbemudia stood out” Igbuya said.

He praised the second republic governor for his role in the Nigerian Counter Coup of 1966.

“His character was legendary, particularly when tested by the counter coup of 1966 and his trial where he was acquitted” the speaker said.

He said Ogbemudia served with distinction as an administrator and a governor of the Mid West State, later Bendel State.

“Ogbemudia was a professional of immense reputation. His was an enduring performance. Apart from his achievements during his military days, he also left lasting testimonies of his contribution to Bendel State.

“Indeed, Ogbemudia, a governor on the platform of the National Party of Nigeria (NPN) and one of the founding members of the Peoples Democratic Party (PDP), played his part well and the legacy he left will remain an eloquent testimony to a life of achievement”.

“Nigerians will certainly miss the man who left a lasting stamp on Edo and Delta. Ogbemudia will be remembered for his very unique and purposeful leadership. He will also be remembered by Nigerians as a brave military officer”.

“On behalf of the good people of Sapele and myself, i send our heartfelt condolences to his entire family, his wide circle of friends and Nigerians as a whole for the loss of this thoroughly good and great man, Chief Samuel Ogbemudia.”