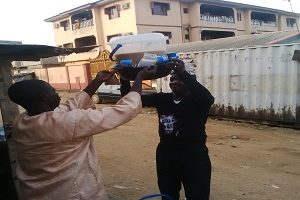 My two eyes never deceive me anytime, they are very accurate. That beautiful afternoon, just passing by along a street in Lagos State, the acclaimed Vice Chancellor of Entertainment, Alhaji Abass Akande Obesere, was sighted with a tea container dishing out for people to buy.

He walked through the streets advertising his wares to attract patronisers and many people were surprised seeing him in such a condition.

We looked around, it was not a Nollywood shoot and then we began to wonder.

To many people’s surprise, a man came from nowhere and said: ‘Cut! Cut! Good job Papa’. Everybody hissed but stayed glued waiting for the next scene. We were later told an Islamic artiste had featured Alhaji Obesere in a song and the visuals were just being shot.