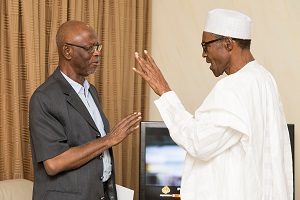 Leaders in the All Progressives Congress (APC) last Wednesday described the action of the embattled Deputy Publicity Secretary of the Party, Comrade Timi Frank as harmful to the country’s democracy.

They also appealed to President Muhammadu Buhari to take steps to protect the country’s democracy by stopping Frank and his sponsors from destroying the ruling party.

The leaders in a statement signed and issued by the Chairman of APC United Front, Alhaji Ibrahim Musa after their meeting in Abuja, described the APC as democratic in organizational practice and goals.

Alhaji Ibrahim Musa, the leaders praised the National Chairman of the Party, Chief John Odigie-Oyegun for taking into consideration the shapes of opinion of the different party leaders, supporters and well-wishers concerning the party’s growth and progress.

“APC is not in trouble. Chief John Odigie-Oyegun is not APC’s problem. He is a man of facts, not given over to wild speculation or sensationalism. His moral reputation is a great asset to the party” they said.

The leaders also commended the national chairman for playing according to the rules and policies of the party.

The leaders said controlling the party ahead of 2019 election cannot happen through political blackmail and intimidation.

They chided Frank for not respecting the national chairman of the party, urging him and his sponsors to stop factionalizing the party and focus on party programs and policy statements.

‘People like Frank are very inexperienced politicians without focus”.

The leaders who also praised Oyegun for promoting democratic values and adhering to basic elements of internal democracy, urged him not to succumb to any intimidation from anybody.