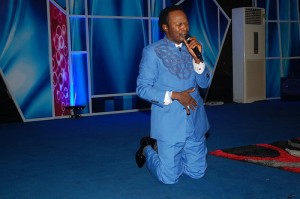 It’s another bomb shell again as Abuja-based Prophet and General Overseer of Champions Royal Assembly, Joshua Iginla, has proven himself once again to be truly called from God as one of his topical 2016 prophecies came to pass last week.

During the cross-over night service held at the Abuja headquarters of his church on December 31, 2015, as usual, he made some prophecies ahead of the new year to prepare the world for what they are likely to see in the new year and no doubt, a lot of it has come to pass.

Similarly, checks by Sahara Weekly revealed that he also predicted the outcome of the Edo 2016 governorship election, which was just concluded some days back with APC’s Godwin Obaseki declared winner of the exercise, even though it was a tough time.

According to the Prophet during the service, “I see the ruling party in Edo still retaining power. I see a strong contest but the ruling party will swallow the opponent” and truly, it was as he said it.

It would be recalled that during the election, a lot of crisis was recorded and the opponent which was PDP wasn’t losing out too but at the end of the day, APC took the glory, to confirm the Prophet’s word.

In addition to this, flashbacks revealed that Prophet Joshua Iginla also predicted the outcome of  Zambia’s election which came to pass, Rivers state election, fuel hike in Nigeria, re-surface of Ebola in Liberia, the Biafra agitation, to mention a few.