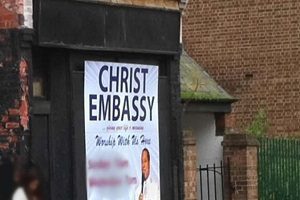 A pastor said to be with Christ Embassy Church in South Africa has reportedly taken his own life due to a Whatsapp error.

The man of God, simply identified as Pastor Letsego, was reported in the South African media to have committed suicide after he sent a picture of his manho0d to his church’s Whatsapp group in error.

The man, who pastors a branch of the Pastor Chris Oyakhilomhe-led church in Limpopo, thought he was sending the photograph to his alleged lover.

After realising the error and the utmost shock and calls that followed the mistake, the pastor, said to be happily married, took his own life to avoid the huge shame brought upon himself.

He was said to have captioned the photo ‘wife is away, it’s all yours tonight.’

According to reports, Pastor Letsego was found 24 hours later hanging in the house rented for him by the church.

One of the late pastor’s members, who begged not to be named, was quoted to have said, “Pastor’s antics have always been a cause for concern, he was always seen in the company of one of the Deacons named Miriam and we suspected there was more to their friendship than meets the eye.

“Quizzed by his wife and congregants, he would shrug off the allegations and say as a Pastor he was a father to everyone and Miriam was his favourite daughter.”

But Christ Embassy was yet to comment on the issue till now.