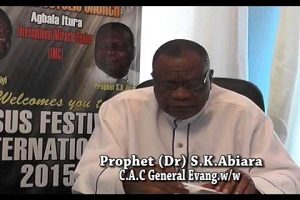 It was reported that the man of God was rushed to the University College Hospital, UCH, Ibadan, Oyo State, over the weekend.

Reports further said Prophet Abiara was precisely taken to UCH at about 1:30 pm and was immediately placed on admission by doctors after examination.

It was not clear what caused his sickness, but there are strong indications that the man had been thinking too much since his wife, Christiana, died about eight days ago.

Aproko247 learnt Prophet Abiara felt devastated over the loss of his wife, who has been a strong pillar to him and his ministry.

He even confirmed this in a post he put on Facebook last week announcing the demise of the woman.

Prophet Abiara described his late wife as “onitemi”, which loosely means “mine.”