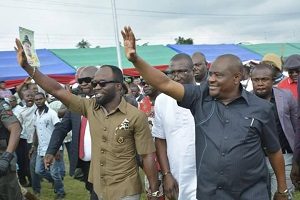 Governor Nyesom Wike of Rivers State has accused the Chairman of the Independent National Electoral Commission, INEC, Professor Mahmud Yakubu, of taking actions that are inimical to credible rerun elections in the state by his alleged secret meeting with the Rivers State APC chairman, Davies Ikanya and Senator Magnus Abe on July 19, 2016.

Addressing thousands of PDP supporters at the Rivers East PDP Senatorial Campaign Rally at Okehi, Etche Local Government Area, Wike said he regrets the posting of “compromised” policemen to the state with the alleged aim of damaging the security network ahead of the rerun elections.

The governor further accused the INEC boss of concluding plans to postpone the July 30, 2016 rerun elections in deference to the fear of defeat expressed by the leadership of Rivers State APC.

He wondered why anyone would be happy to destroy Rivers State just because they want to satisfy the politician who funded t APC national elections efforts using Rivers State resources.

The governor said: “They are frustrating elections in Rivers State because of one man who sponsored elections for APC. They have posted electoral officers from APC states to rig elections and they want to accede to the request of the Rivers State APC to post out the Resident Electoral commissioner.

“But the truth is that nobody can rig elections in Rivers State.

“The INEC National Chairman only has the power to postpone elections, but he has no power to rig elections here.

“As I speak to you on 19th of July, 2016, the APC chairman, Davies Ikanya, Senator Magnus Abe and others, 7.30 to 8pm were with the INEC National Chairman in his office.

“Rivers State is key to the development of this country. Will they continue to deny us representation at the Senate and majority of the constituencies of the House of Representatives?”

He called on the people of Rivers State to continue to resist every attempt by INEC to rig elections in the state because power resides with the people.

According to him, “You saw what happened in Turkey where the people effectively resisted the Army who plotted a coup to dethrone an elected government. Here in Rivers State, the people will resist any attempt to use compromised security personnel to rig the polls”.

The governor said that the APC are not campaigning for the rerun elections because of the assurances they have received that the elections will be rigged in their favour.

He noted that just as the Rivers APC backed by security agencies could not swap the result sheets handed over to them by compromised INEC officials on March 19, 2016, so they will fail when the forthcoming rerun elections are conducted as a result of the vigilance of the people.

He reiterated that anyone posted to Rivers State with the aim of rigging the elections should inform his family the location of his hidden wealth as he will face the treatment reserved for armed robbers.

Commenting on the politicised posting of compromised senior police officers to Rivers State, Governor Wike said that he has written four letters to the new inspector general of police on the issue and made 45 calls to the police chief on the issue without getting a response.

Speaking further, he said the new inspector general of police posted Mr Akin Fakorede, the former Officer in Charge of the Special Anti-Robbery Squad distributed fake SARS uniforms to APC thugs during the March 19 rerun elections leading to the death of several innocent Rivers people. He also accused Fakorede of embezzling N18 million meant for the rehabilitation of armoured personnel carrier before he fled the state after the rerun.

Governor Wike accused the inspector general of police of posting one Mustapha back to the state after ran away upon his false testimony at the Tribunal. He stated that Mustapha now heads Mopol 56 in Bori one of the major locations of the rerun elections.

He added that the Police High Command has also reposted one Stephen Asin, former Officer in Charge of Special Anti-Robbery Squad, back to the state after the same officer publicly declared that he will destroy the security network in the state. He informed that Asin will now head the operations department of police in the state.

In his remarks, Former Minister of Transportation, Dr Abiye Sekibo said that the people of Rivers State will continue to vote PDP because it is the only political party that will address the hunger in the country.

Rivers State PDP Chairman, Felix Obuah assured that the PDP will win all the forthcoming rerun elections because of the performance of Wike.

In his address, Rivers East Senatorial Candidate, George Thompson Sekibo urged the people of the district to reaffirm the elections of all PDP candidates during the forthcoming rerun elections.