I Remain Loyal To APC—Saraki 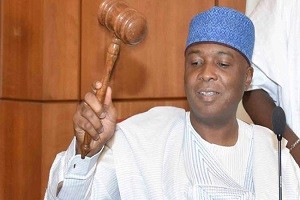 Senate President, Bukola Saraki, has reaffirmed his commitment and loyalty to the ruling All Progressives Congress, APC, despite his battle with the party.

Saraki also reiterated his belief that the President Muhammadu Buhari’s government will redeem its electoral promises made during the 2015 general elections.

The Senate President, who spoke at the 10th Abuja Housing Show, where top government officials and prominent stakeholders in the housing sector brainstormed on the theme, “Expanding Access To Affordable Housing In Africa,” said he still believes in the party.

Acknowledging the presence of the APC National Organizing Secretary, Senator Osita Izunaso, who earlier kick-started discussions at the summit, Saraki assured that the APC government is unwaveringly committed to the social welfare of the people while re-affirming his unalloyed loyalty to the party.

“The Senate and the National Assembly as a whole believe very strongly that we must make a difference in the housing sector,” he said.

Saraki, reacting to observations that the existing housing laws need respective amendment and repeal, charged the organizers of the Summit to take a further step by forwarding a document of laws requiring amendments to the National Assembly.

“I assure you that action will be taken instantaneously,” he promised.

Saraki asserted that the Senate has commenced the review processes of several laws affecting property rights and access housing in the country.

According to him, the review of the National Housing Fund Act is on-going and would be completed before the end of the year.

According to the APC National Organizing Secretary, Senator Izunaso, housing deficit in Nigeria is pegged at 17million housing units.

“As at today, only 10 per cent of those who dream to own a house in the country can afford it, as against the 92 per cent house owners in Singapore.

“The central objective of the Summit, however, is to come up with feasible strategies on how to end the problem of homelessness in Nigeria,” Izunaso said.

Other personalities at the Summit include the representative of the Speaker of House of Reps, the Minister of Power, Works and Housing, Babatunde Raji Fashola, Kano State Governor, Dr. Abdullahi Umar Ganduje, Turkish Ambassador to Nigeria, Hakan Çakıl, TUC President, Comrade Bobboi Kaigama, among other investors.