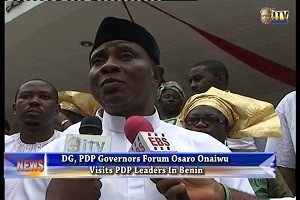 In a letter addressed to chairman of the Forum, Olusegun Mimiko, who doubles as the governor of Ondo State, Onaiwu noted that his decision was to allow him pursue other endeavours.

Onaiwu was an Edo State governorship aspirant on the platform of the PDP but failed to participate in the party primaries that held on Monday in Benin City, which produced Osagie Ize-Iyamu as flag-bearer for the September 10, 2016, gubernatorial poll.

“Unto every time there is a season, and in line with this Biblical truth, I wish to inform His Excellency of my resignation, effective June 21, 2016 as the Director General of the PDP Governors Forum.

“I am persuaded to call it quits in order to pursue my future endeavour in other capacity.

“During my years as DG of the Forum, I am consoled by the fact that my loyalty, competence and service was at no time in doubt, therefore will be leaving with gratitude,” he said in his resignation letter.

“I wish to thank His Excellency and all his brother governors, present and former, for their support during my term as DG and wish the Forum the best.

“I profoundly thank His Excellency, Dr. Bukola Saraki, President of the Senate, who gave me the initial opportunity at the Nigeria Governors Forum, as well as their excellencies, former Governor Jonah Jang and Godswill Akpabio, who led the NGF and PDP Governors Forum at different times for their support and confidence,” Onaiwu concluded.