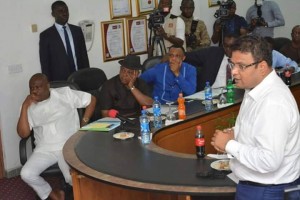 Rivers State Governor, Nyesom Ezenwo Wike has declared that the success story of the Indorama Eleme Fertiliser and Chemicals Limited which is the largest urea fertiliser company in the world is a clear testimony that the state is a safe haven for multi-billion dollars investments.

Speaking at the Indorama Eleme and Chemicals Limited on Monday after a facility tour, the Governor said, “Rivers State is a safe place for investors to commit their funds for profits.

“For the company to develop the world’s largest single urea Fertiliser Plant, build an 83 kilometre gas pipeline and set in place a big manufacturing concern in 3 years shows that this State is the business hub of the country.”

According to him, for the company to expend about $3 billion across five local government areas in the state to develop production facilities proves that all the reports about insecurity are sponsored propaganda.

He assured that his administration will continue to provide the enabling environment for investors to thrive, pointing out that the Rivers State Government will partner with Indorama to build a sustainable small and medium scale enterprises business hub for Rivers people to benefit.

He described Indorama Eleme Fertiliser and Chemicals Limited as “a right investment in the right environment.”

Wike urged the company to improve on the employment of indigenes into management positions for more fruitful relationship with host communities.

He directed the State Attorney-General and the Special Adviser on Investment to work out details on the partnership structure between Indorama and the state government.

He added that with the presence of the company, Nigeria has saved $65 9 million that would have been used for importation.