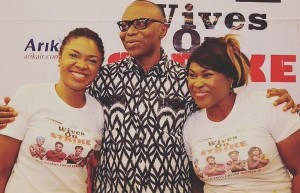 A new movie by the duo of Omoni Oboli and Uche Jombo has been endorsed by the Ondo State governor, Olusegun Mimiko.

The flick, Wives On Strike, was premiered in Akure, the state capital, and it was attended by the number one citizen of the state.

Several people trooped out to see the film, which was screened on Tuesday night and they were not disappointed.

The event took place at the Akure Film House.