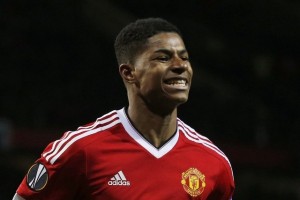 Manchester United may eventually finish this season in top four and get the chance to play in the Champions League next season, thanks to Marcus Rashford’s strike at the Etihad on Sunday.

The teenager’s lone goal was enough to rekindle the Red Devil’s hopes of finishing top four this season.

Rashford scored 16 minutes into the game against their noisy neighbours, Manchester City after receiving a through pass from Juan Mata.

The new Manchester United hero first went past Demichelis before slotting the ball past under the arm of Joe Hart, who was later stretched out of the match due to injury.

It was the starlet’s first Manchester Derby as well as first goal in the derby, which was played at the Etihad Stadium.

With the win, United now have 50 points, same with West Ham on firth, but ahead the Reds on goal difference; one behind City, who are fourth on the table; and five behind Arsenal, who sit third on the log.