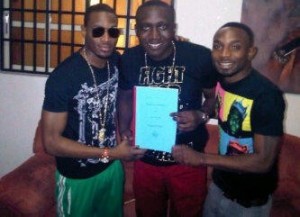 Information reaching us has it that Nigerian music star, D’Banj, has ended his working relationship with his label producer, Divine Austin, who goes by the name DeeVee.

About four years ago, the DB Records boss announced DeeVee as his label’s official producer.

However, during the time both worked together, D’Banj could not release a chart toping single, which some speculated did not excite the Ogun State-born entertainer.

DeeVee confirmed his exit from the label when he posted on Twitter, “4 years after… end of an era… moving on… #LeeTemple was fun.. let’s conquer again…”

Though no cogent reason was given for the split, but there are indications that D’Banj was never impressed with his former producer.

In late 2015, DeeVee had a clash with Olamide, accusing him of stealing a single belonging to D’Banj.

D’Banj and Olamide later settled the issue, but DeeVee went on to drop an unreleased song of D’Banj without his consent, a move D’Banj was never okay with.