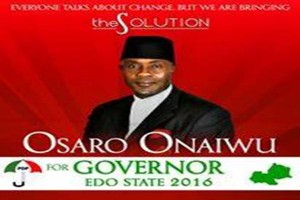 The political atmosphere in Edo State has resurrected. This time, not like the popular assumption of who was, is or who is to become.

Several names from public domain has emerged with monumental manifestos, but this time, unlike business as usual, every Edo indigenes have been strategically positioned to contribute immensely to the cleansing of the land their forebears bequeathed to them.

The ancient city with all its pedigree wouldn’t clinch the ember of disappointment at this very crucial time even as several names have emerged to occupy the number one seat of the state.

Popularity however, might be a factor but not a very vital consideration as the people with their hopeful and intuitive analysis over the years and in the past, have drifted from that archaic view of popularity belief, rather, have geared towards projecting a candidate whose pedigree (even though such a candidate wasn’t into political rofo rofoism before now) is capable of correcting the economy mishap they have suffered especially in the area of physical development and not invincible mantra of empty promises.

Amongst these names jingling like a raging Christmas bell, one person whose background has been known for years but very quiet and resilient is EARL OSARO ONAIWU.

This young astute businessman and politician seems to be one outstanding in all facets of requirements in respect to the forthcoming Edo State election. He talks less but full of brains and a grassroot factor as far as Edo State politics is concerned. (His close allies nicknamed him the planners quiet achiever) His record is as clear as a crystal ball.

Like the popular attitude attached to politics, every sanctimonious conviction by various categories of persons whose ambition it is to occupy the enviable seat immediately after the elections, has earnestly commenced and remains a paradox as there is every indication of a paradigm shift from the popular old pattern of hand picking persons to lead the Edo people into another chapter of development and progressive tabloid.

It is therefore pertinent to note that whatever decision as saliently incubated should however, favour the cause of the good people of Edo State.

EARL OSARO ONAIWU popularly called EOO, aside his interest to contribute his quota to the Edo people has been vehemently chosen especially by the youths in the state who believe that this is the right time to swing the concentration of elderly vague politics to the youth wing and whose door will not be difficult to access by the time the atmosphere has pronounced him as the CSO of Edo State.

OSARO is one joker that posses as a monumental threat amongst his other runners because of the enviable attributes he possess. For a very long time, for once, Edo people seem to have consulted the world beyond by choosing and sanctioning this young vibrant son of the Binis to lead them for another four years.

Inclusion of youths into policy formulation is one other aspect that the destiny of Edo youth has been sold to the dustbin. Until the deceptive paralegal enigma of belief is expunged from such mentality debacle, many will remain lost in perpetual hallucinations, hence, the need for a radical swift of political change.

It is on this note that youth inclusion in policy formulation comes to mind as it will do the entire Edo people huge good to allow those that won’t be part of a certain generation to make decisions that they won’t be part.

EARL OSARO ONAIWU is passionate and represents the interest of the entire Edo Kingdom, both the youth, the elders and the aged have always been his major wish of concentration. He is a philanthropist but one with an innocent heart that doesn’t champion a cause to for benefits.

A decision to feed this very young man for the seat of gubernatorial will be an enviable decision as other states would have wished this very young quintessential gentle and honest man is from their state to accept same responsibility.

This long awaited touch light has been beamed on EARL OSARO ONAIWU and without prejudice and sentiments, he alone deserves this civil assignment as he has all it takes to move Edo State to the height of supersonic development in the near future.

The only challenge posing before Edo indigene is if this son of the ancient Benin kingdom will come to their rescue by agreeing to bail them out from this retrogressive stance they are currently in, by accepting their offer for him to run and lead them, as a pure hearted human, EARL OSARO ONAIWU can’t say no because with him, Daniel has come to developmental judgement in Edo State.