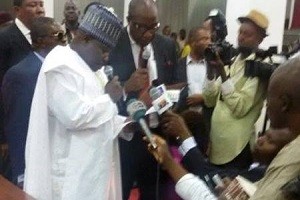 The Independent National Electoral Commission, INEC, has dismissed reports by the former National Chairman of the Peoples Democratic Party, PDP, Ali Modu Sheriff that the Commission did not monitor the PDP Gubernatorial Primary Election held on Monday, June 20, 2016 in Edo State.

Speaking to the media in Abuja on Friday, June 24, 2016 on behalf of the leadership of the PDP Rebirth Group, Comrade Frankline Edede said Sheriff is a serial liar and will say anything to defend his infantile behaviour.

“PDP members nationwide and the general public can now see how Senator Sheriff’s desperation has resulted to telling lies even against INEC.

“First of all, he claimed that he has a Court Order that gave him legitimacy to remain as Chairman of our Party and sold this dummy to the former Inspector General of Police, Solomon Arase, and the media during his obnoxious press conference at the Party’s National Secretariat.

“At another point, he told those who care to hear him that the Independent National Electoral Commission (INEC) has given him letter authorizing him to act as the authentic National Chairman of the PDP.

“And now, Senator Sheriff while inaugurating his cantankerous governorship committee for Edo State claimed that INEC did not participate in the Primary Election conducted by the Governor Dave Umahi’s led Gubernatorial Committee, what a serial liar,” Edede said.

Responding to Sheriff’s claim, the Independent National Electoral Commission through its Director of Voter Education and Publicity, Oluwole Osaze debunked that assertion and affirmed that INEC was on ground to monitor the Monday 20, Gubernatorial Primary of PDP.

The INEC’s Director of Voter Education and Publicity, Oluwole Osaze Uzzi, who spoke to journalists on telephone said that, “I am not aware of claims by anyone to the contrary, but all I can say is that INEC’s staff witnessed the PDP governorship and they are in the process of submitting their report.”

In the same vein, the Chief Press Secretary to the INEC Chairman, Rotimi Oyekanmi, confirmed to reporters that the commission was represented at the primaries which saw the emergence of Pastor Osagie Ize-Iyamu as the PDP flag bearer.

“With this confirmation, we wish to advise all our members and supporters nationwide and Edo State in particular to stay away from any contraption by Senator Sheriff and co-travelers that are hell-bend to destroy our great Party”.

Comrade Edede called on all PDP Youth Groups to be aware that the PDP is one saying that Senator Sheriff’s tenure was to complete the regime of the North East which began in March 2012 in accordance to the Constitution of the Party and that the tenure of Senator Ali Modu Sheriff, other NWC members and their Deputies ended on the 21st of May, 2016 as approved by the highest decision making Organ of the Party, the National Convention.