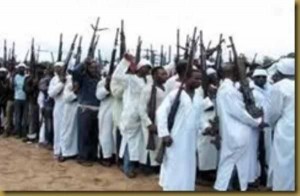 Several persons were reportedly feared dead in a raid by members of the Islamic sect called Boko Haram in Adamawa State.

It was said that the terrorists raided three communities of Sabon Gari, Kafin Hausa and Bakin Dutse of Madagali Local Government Area of the state.

Also, many houses were burnt by the rampaging Boko Haram members, who attacked anything on sight.

“Our family house was one of those destroyed by the terrorists, but when some people alerted the security operatives stationed in Gulak and Madagali, there was no response until the whole place was destroyed by the insurgents,” an unanimous police officer from the area but who is based in Maiduguri, told Vanguard.

“My distressed people called me about the deadly attacks that lasted for three days beginning from Wednesday, but no positive response until the whole villages were destroyed; many of our people might have been killed, but fortunately, after they returned to the troubled communities, they chose to spend their whole day and night in their farmlands for safety,” the officer added.