Buhari Returns To Nigeria From London 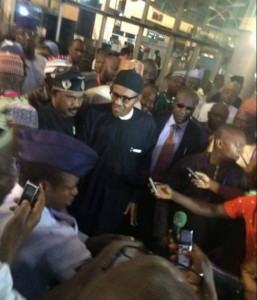 Presidential candidate of the All Progressives Congress, APC, Muhammadu Buhari, on Friday, returned to Nigeria from London, days after he spoke at the Chatham House in England.

His sudden departure from Nigeria to the United Kingdom had generated controversies.

The governor of Ekiti State, Ayo Fayose, had severally insisted that the former Head of State left Nigeria for a medical check-up abroad. He had earlier claimed that Buhari aimed to travel to the US en-route the UK, but the APC replied him that their party’s candidate was in the Queensland on a working visit and also to speak at the respected UK think-tank place.

Buhari arrived Nigeria on Friday morning on a British Airways flight from London. He was met with anxious newsmen and supporters, who he addressed shortly after his arrival at the Nnnamdi Azikiwe International Airport in Abuja.

ALSO READ  Nigerians Will Like To Have Another Abacha—Jeremiah Useni

He assured his supporters that he is ready and fit to complete his campaign for the presidential poll, which holds at the end of March.