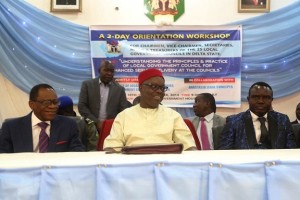 Governor Emmanuel Uduaghan of Delta State has thrown his full weight behind local government administration in Nigeria, calling for urgent and pragmatic steps that would reposition the third tier of government for effective service delivery at the grassroots level.

The governor, declaring open a two-day orientation workshop for newly sworn-in local government chairmen, vice-chairmen, secretaries, heads of personnel management and treasurers of the local government councils in Delta State, expressed faith in the ability of local governments to fulfill their roles if provided with the enabling legal and institutional framework to operate.

According to him, a situation whereby salaries of primary school teachers gulp more than 60 per cent of revenues accruing to the local government, leave the councils with little or nothing for development purposes, after payment of local government staff salaries.

He said, “I am a very strong advocate of removing the salaries of primary school teachers from local governments because; over sixty per cent of Local Government Councils’ revenue is spent on the payment of teachers’ salaries.”

Uduaghan added that, “You have to pay staff salaries which gulp over 30 per cent and you are left with less than 5 per cent for other developmental projects and for us to hold local government councils accountable and to ensure that this system of government that is closest to the grassroots works, there has to be more money available to them through increased allocation from the Federation Account.”

He also suggested that local government councils be engaged in revenue drive to shore up their funds, especially with the fall in the price of oil which has affected the revenue of the Federation Account, adding that the Delta Beyond Oil initiative of his administration should be imbibed by all the councils to enable them rely less on allocations from the Federal Government.

Uduaghan explained that the seminar was to prepare the council administrators to face the reality and challenges of governing the third tier of government and urged the participants to ensure harmonious relationship at the local government levels, stressing the need for harmony among elected officials on the one hand and harmony between them and civil servants at the councils.

The Commissioner for Local Government in Delta State, Dr Ben Iweze and the Chairman, Local Government Service Commission, Comrade Olumami Oyibo represented by Paul Uwechue in their separate remarks expressed the hope that the seminar will give the participants the needed knowledge to discharge their duties and enhance service delivery to the people.