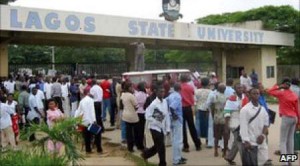 On Wednesday, the state government announced the reduction of LASU tuition fees by 34 to 60 per cent, after the report submitted by the Ad- Hoc Committee on the LASU fee review was looked into.

Addressing a press conference on Thursday, the Union’s President, Nurudeen Yusuf, asked the government to give details of the reduction in terms of its naira and kobo value, claiming this was the same procedure the government followed during the increment in 2011.

“We do not accept the percentage reduction of the government because in 2011, when the fee was increased, it was not done on percentage level but in naira and kobo,” the Union boss said, asking, “how do they expect our parents, the market women scrambling to pay our fees, to calculate the percentage?”

The government finally bowed to pressures to reduce the hiked school fees following protests from students and condemnations from various civil society groups. The tuition fee was increased from N25,000 to N193,000 for Arts and Education courses and N350,000 for medical students.