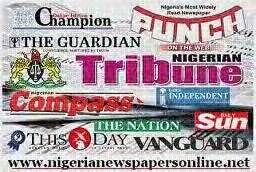 *I had difficult times as PDP chairman – Tukur

*Most politicians have no business in politics –Jonathan

*Tukur to be appointed Defence Minister

*Eagles back to reckoning, send S/Africa out

*Confab, Chime and my constituency, by Ekweremadu

*Confab, Chime and my constituency, by Ekweremadu

*APC’S Move to Topple PDP: The shape of the battle to come in House of Reps

*With Tukur’s exit, is it yet uhuru for PDP?

*We’re in politics due to joblessness –Jonathan

*How Apalara, Islamic preacher was killed

*Obasanjo insists on allegation against Kashamu

*New and evolving challenges faced by IT professionals

*2015 elections and the return of Ibori

*PDP: Obasanjo and the consequences of withdrawal

*The rise and exit of Bamanga Tukur

*My enemies haven’t given up – Stella Oduah

*Kwankwaso thanks The Sun for Man of the Year 2013 award

*How my successor can succeed, by Tukur

*No policeman can stop GDI or arrest members, says Wike

*Court to try ex-bank chief, IGP, others for contempt

*Incumbency and impunity in politics: Securing democracy beyond 2015

*500 motorised boreholes to be drilled in Kogi