Salary Arrears: ASUP To Get N20.4b From FG 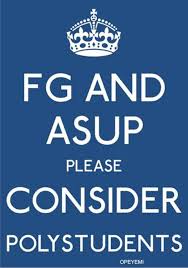 Striking members of the Academic Staff Union of Polytechnics, ASUP, will get the sum of N20.4 billion from the Federal Government as salary arrears in the new CONTISS salary structure. This was approved by the FG after the union met with the government on Tuesday in Abuja.

The Supervising Minister of Education, Nyesom Wike, who represented the government at the meeting, confirmed the development. The meeting was also attended by the National Association of Polytechnic Students, NAPS.

The Minister said what was delaying the payment was an agreement by both parties on the modalities for the disbursement of the money. He noted that the CONTISS salary structure requested for by ASUP had been approved by the FG and was also included in the 2014 budget.

Wike added that apart from the release of the white paper on visitation panel to polytechnics, which is the only outstanding issue raised by the lecturers, all other three demands have been met.

He assured the union that the government was working on the outstanding issue and expressed optimism that it would be resolved soon.

After earlier several meetings, ASUP and FG agreed to narrow down the union’s 13 demands to four, which are; setting up a Needs Assessment Committee for the polytechnics; implementation of the CONTISS salary structure; constitution of governing councils for the schools; and the release of the white paper.

The union has been on strike since 2013.