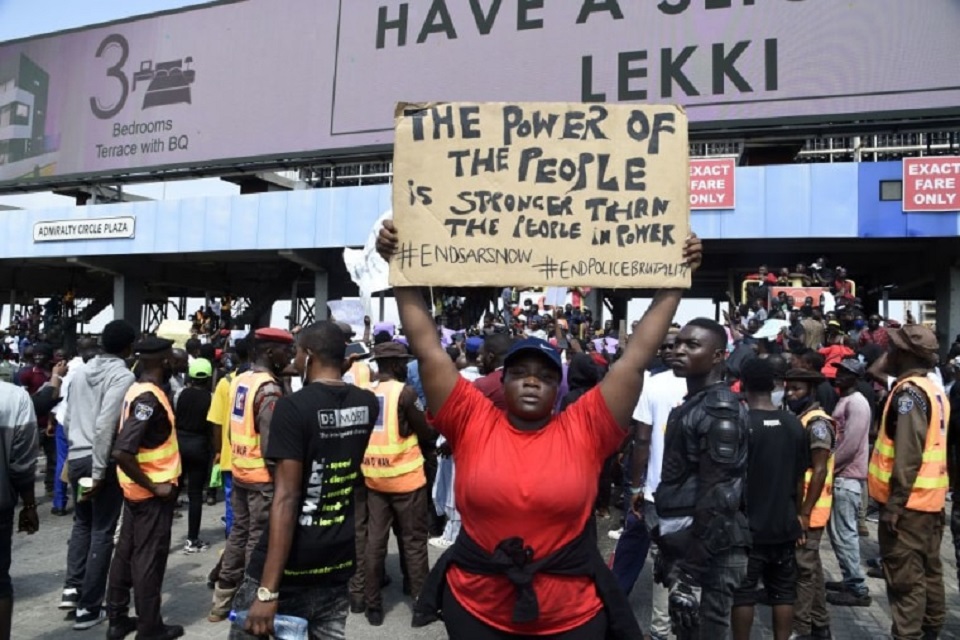 A Dedicated fighter for Government Accountability & Justice and Human Rights Journalist, Jumu’ah Abiodun, has told the Nigerian Government headed by President Muhammadu Buhari to restructure the country for peace to reign.

The activist in a statement made available to journalists noted that the only way for peaceful coexistence in Nigeria is for the government to take it as a matter of urgency to revisit the 2014 Nigerian National CONFAB report and restructure the country.

Jumu’ah stated further that the ongoing protest is far beyond on police brutality occasioned by the #EndSARS protesters but for the resistance of oppression and corruption by the Nigerian ruling class who sees nothing wrong in stealing public funds.

“The youths are frustrated, the government must be careful with this protest not to end in “#RevolutionNow,” This is beyond #EndSARS, some of the youths are now clamouring for an end to corruption.”

“The protest continue, the youths are getting stronger everyday, N30m has been raised within few days by supporters, driving ambulance buses, doctors & nurses and lawyers on standby to treat injured and releasing arrested protesters”

“The protesters are now walking miles with placards, deploying websites and bots, as well as #EndSARS Wikipedia”

“I don’t know why our leaders are not ashamed of themselves? Minimum wage is N30, 000 and a bag of rice is over N30,000, petroleum price now at N162 per litre, food price skyrocketed by 70 per cent. Nothing good is working for the citizens as corruption take center stage, ASUU still on since over eight months”

“Seriously, this present leaders has failed Nigeria, barracks looks like dumpsites, Police buys uniforms, buttons, no leave, no insurance and political office holders go home with millions of naira every month and you don’t want them to receive bribe? you are a joker.”

“While we talking about corruption in Nigeria, President Buhari then nominated his aide who is a card-carrying member of a political party to be Commissioner in the nation’s election umpire.”

Recall, Jumu’ah in his Nigeria at 60 message to Nigerians home and in Diaspora advised the Buhari administration to repeal Petroleum Equalisation Fund (PEF) and Niger Delta Development Commission (NDDC) to curb corruption.

“If we really want to be one, my advice will be good for the peace of the country, there’s an urgent need for any government who want peace and want to end corruption to stop ‘PEF’ with immediate effect because those in the West don’t buy ‘Yam, Onions and Pepper’ same price as they sell in the North, so why paying for PEF. PEF is just a fraudulent policy with which public office holders are using to siphon public funds,” Jumu’ah noted.

He explained further that: “Another loophole left open for the stealing of funds is the Niger Delta Development Commission (NDDC). In the first place, for whatever reason NDDC might have been created, it’s clearly unnecessary. Construction or rehabilitation of Roads in the region, ministry of Works should do that. Cleaning of the Ogoni oil spill, the ministry of Environment fits in.”

The activist faulted IGP Mohammadu Adamu for pronouncing Special Weapons and Tactical Team (SWAT) so quick, “pronouncing SWAT to replace the dreaded SARS within four days of the dissolution of SARS, when the whole world still protesting against injustice, police brutality in Nigeria is a wrong shot by the IGP and the Presidential Panel on Police Reform”, Jumu’ah stated.

“What we need is total police reform, where citizens can record police officers activities on the road without no fear or violence, then we can have a decent policing environment. Provision of genuine life insurance for the police as well as good salaries at the same par with political office holders.”

“For record purposes, PDP did not establish SARS as claimed by some quarters, Simeon Danladi Midenda (Rtd) formed SARS when late Col. Ezra Rindam of the Nigerian Army was killed by police officers at a checkpoint in Lagos in September 1992.”

The activist also commended Prof. Julius Ihonvbere, who is representing Owan Federal Constituency of Edo on his contribution towards impending Academic Staff Union of Universities (ASUU) strike for conceding no government in Nigeria has been able to solve one single problem since Independence in 1960.

“Part of the problem is what is happening with ASUU, we are talking of out of school children and your governor goes out with twenty (20) cars, they are spending money to hire tugs but they cannot build schools for their children talk less of feeding the children once a day. Let’s take ourselves more seriously, let’s take our country more seriously, and do the right thing at the right time to save the future.”