The Politics of Amotekun Creation and Outlaw, By Omoshola Deji 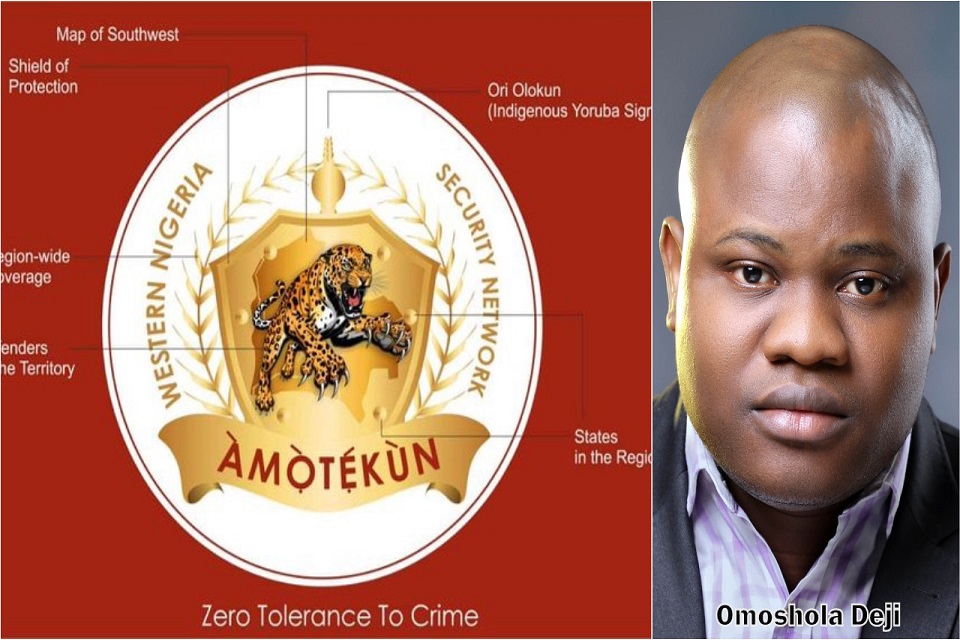 Security is the principal obligation of government, because it is the most important need of man. Life is universally considered sacred, but only the lives of the ruling oligarchy is sacred in Nigeria. Being alive is a privilege as Boko Haram, killer herdsmen, kidnappers, armed robbers, ritualists, trigger-happy officers, and other messengers of death are around you, ready to send you home. Governors of the six Southwest states moved to combat the insecureness by establishing the Western Nigeria Security Network, codenamed Operation Amotekun.

The initiative has been sternly criticized in the North and declared “illegal” by the Northern dominated federal government. The declaration which was made by the Attorney General of the Federation, Abubakar Malami has deepened the cold war between the North and South (six) geopolitical zones. The Southwest, supported by the Southeast and Southsouth, has vowed to carry on while the Northwest, Northeast, and parts of the Northcentral are insisting that would not be.

Operation Amotekun wouldn’t have evolved if the Southwest is secured. The saying ‘all politics are local’ made the governors act to save their jobs. Buhari can no longer contest, but five of the six governors are in their first term. Apart from Governor Kayode Fayemi, who is in his second term, the fear of losing reelection pushed the other five governors to act, despite the fact that four out of them are members of President Muhammadu Buhari’s party, the All Progressives Congress (APC).

Buhari’s sectionalism gave birth to Operation Amotekun. Aside appointing the security chiefs from his tribe, his refusal to sack them in the face of underperformance, unprofessionalism and partisanship made him lose the confidence of the Southwest. Another remarkable flaw is Buhari’s failure to deal decisively with the killer herdsmen of his ethnic extraction, as he did to the less violent Shia movement, and Biafra secessionist group.

Buhari seems unaware that people always look out for how the community disciplinarian would discipline his own children when they go wrong. While Buhari swiftly repress dissenting voices, the killer herdsmen that allegedly perpetrated genocide in Benue and Taraba states are yet to face justice. In Yoruba land, the killer herdsmen that allegedly kidnapped Chief Olu Falae; destroyed several farmlands; sacked Orin Ekiti residents and hoisted flag; killed several persons, including the daughter of the leader of Afenifere, Pa Reuben Fasoronti, are all yet to be brought to book.

ALSO READ  RE: Nigeria On The Verge Of Bankruptcy: Emir Of Kano Meant Well For Nigeria

Buhari would have saved his government backlash, if he had scared the killer herdsmen as ex-president Olusegun Obasanjo did to the Oodua People’s Congress (OPC) in 1999. His shoot-at-sight order buried the OPC’s prospect of violence. The group may have grown monstrous and untamable if Obasanjo pampered them the way Buhari is handling the killer herdsmen. While one may argue that Buhari soft pedaled to win a second term, nothing has changed since he got reelected.

Buhari may mean well for Nigeria, but nepotism and sectionalism are hindering him from making significant impact. Call it politics, but he has an unstable character. He indicatively preaches national unity, but remains grossly partisan. He habitually says one thing and does the other, thinking everyone is blind, without realizing all eyes are on him. We are really not in the mood to talk about his several failed manifestos, including the forsaken subsidy, electoral reforms and restructuring promises.

Greed for power has kept the Southern politicians nursing presidential ambition silent; they would never speak out even if their hometown is razed. Many are criticizing Tinubu, but in fairness to him, anyone that would speak on the Amotekun issue would have no ambition to occupy Aso Rock. Even the Twitter vocal ex-vice president Atiku Abubakar has been silent because he doesn’t want to bag criticisms in the North. In the same vein, Tinubu is keeping mute in order not to offend the North and to keep his Southwest support intact. His calculative politics of silence may either work for him or ruin him, depending on what the cabal thinks.

Tinubu is the Southwest political godfather and Amotekun couldn’t have been created without him being in the know. If tackled on this, Tinubu could argue that his absence and that of his three most loyal governors of Lagos, Osun and Ogun states at the launching of Amotekun is an indication of his disinterest in the project. If queried in the Southwest, he would argue that the states he holds sway wouldn’t have donated funds and vehicles to the Amotekun project if he’s against it. Tinubu is being calculative and tactical; hoping to eat his cake and have it, but time will tell.

One must be suspicious of the neighbor that criticizes someone for improving on security after being robbed. Such neighbor is either the robber or planning its own operation. The northern opposition of Amotekun lends credence to the alleged Fulanization agenda. It is discomforting that majority of the Northerners are criticizing the Southwest over Amotekun, when they have similar paramilitary and community policing corps such as the Hisbah Sharia police, and the civilian Joint Task Force (JTF).

ALSO READ  5 Amazing Ways to Get Free Accommodation While Travelling

Amotekun is even more important than Hisbah. The former is a security outfit, while the latter is a religious doctrine enforcement body. Those condemning Amotekun but seeing nothing wrong in Hisbah failed to realize that you can live without practicing any religion, but can’t practice religion without life. By the notion of Maslow’s hierarchy of needs, you will only remember religion when you’re safe. The most devoted Muslims would be the first to seek protection in the Church (and vice versa) during war.

The only outfit that could be compared with Amotekun is the civilian JTF assisting the military to combat Boko Haram. It is dishonorable that the same government that has allowed Hisbah operate unchecked – despite Nigeria’s secularity – is kicking against Amotekun. The argument that Amotekun would be used for political purposes is clearly untenable as they don’t bear arms; one of the major instruments that makes rigging possible. Insecurity in the Southwest is alarming and any viable means of ending it – including Amotekun – must be embraced by every Nigerian that cherishes life.

Unlike parts of the Southeast, the Southwest has no secession plan, but has vehemently clamored for restructuring – which is one of Buhari’s campaign promise. Those claiming that Amotekun is the manifestation of a secession plan don’t value cooperation. The Southwest governors should be applauded for collaborating to resolve the region’s challenges. It is no fault of theirs that the governors of other troubled regions can’t unite to tackle their problems.

Miyetti Allah Cattle Breeders Association’s statement that Amotekun may cost the Southwest 2023 presidency is a show of ignorance. Emeka Ihedioha woke up as the Governor of Imo State on January 14, but slept as an ordinary citizen after the Supreme Court unexpectedly sacked him from office. Can Miyetti Allah stop the Southwest from taking over power today if (God forbid) the president pass away? Moreover, who gave Miyetti Allah the power to decide who will rule and when to rule?

ALSO READ  Why Fossil Fuels Are Harzardous To Health, By Eyitayo Alimi

The word on the street is that the federal government is kicking against Amotekun because members of Miyetti Allah are not enlisted in the outfit. It is practically impossible for the Southwest to enlist the same herders suspected of killing the daughter of the leader of Afenifere. If absorbed into Amotekun, would Miyetti Allah absorb and agree to a rotational leadership of their organization with the Yoruba tribe?

As laudable as the Amotekun initiative is, one must be cautious of the dangers of operating with a programmed mindset. Amotekun may bring about ethnic persecution that would transmute into a civil war, if its handlers should conclude that the crimes in the Southwest is being committed by the herdsmen and the Hausa-Fulani ethnic group. It is dangerous and unfair to create an orientalist view of a tribe with several intellectual and successful people as criminals and terrorists.

Amotekun was created to assist the already overwhelmed Nigerian security agencies. For one thing, Amotekun would drastically reduce the death of security officials who lose their lives while hunting for criminals in unfamiliar terrains. Amotekun is an integration of all the vigilante and local security outfits in the Southwest under one umbrella. Nigerian security agencies have always engaged the services of these outfits during difficult operations. For instance, the military once engaged the OPC to help them drive out notorious criminals from their hideouts in the Mile 2 and Ojo area of Lagos state. The police also contracted the OPC to help them decimate the infamous Badoo cult in Ikorodu, Lagos.

Amotekun is a way forward; a step towards getting lasting solutions to Nigeria’s insecurity. It is a timely, commendable and laudable initiative that evolved from Buhari’s inability to provide adequate security, despite being a retired Major General. Any further move to outlaw Amotekun may lead to crisis as the outfit has gained tremendous public support. Beyond citizens’ protection, Amotekun must survive out of love for the country. Additional security measures are needed at this trying time. We cannot keep overworking and risking the lives of our security agencies in unfamiliar terrains. The officers are someone’s brother, sister, father, mother, husband and wife. Those opposing Amotekun certainly won’t be happy to lose any of the listed persons on their own end.

Omoshola Deji is a political and public affairs analyst. He wrote in via moshdeji@yahoo.com