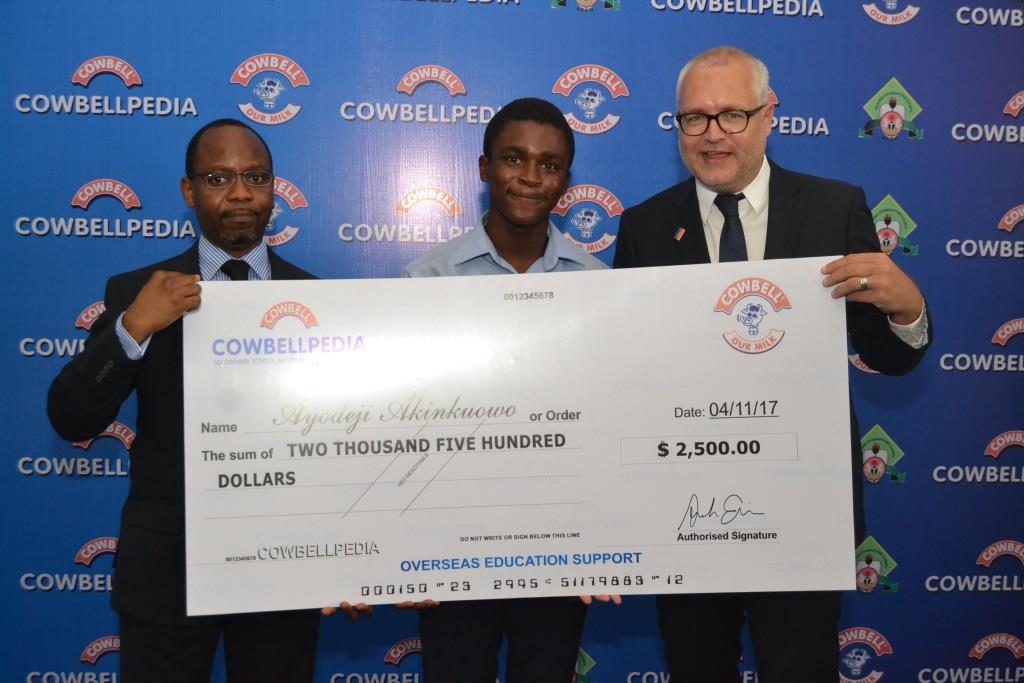 Ayodele Akinkuowo, the 2015 Senior category winner of the Cowbellpedia Secondary Schools Mathematics TV Quiz Show, has secured a scholarship to study Aeronautic Engineering at the University of Moscow, Russia. Promasidor Nigeria Limited, the makers of Cowbell Milk brand sponsors of the Quiz Show also donated the sum of USD $2,500 in appreciation of the feat by a ‘Cowbellpedia Ambassador.’

Akinkuowo was a student of Adeyemi College of Education Demonstration Secondary School, Ondo, Ondo State when he won the Cowbellpedia Mathematics competition in November 2015.

While hosting him in Lagos, Mr. Anders Einarsson, Managing Director of Promasidor Nigeria Limited, noted that the company remains proud of the achievement of the young man who has hoisted the Cowbellpedia flag higher by his brilliant outing. He added that the money was a token of support for his trip and assured that Promasidor would continue to support the academic development of Nigerian children.

In his remarks, Akinkuowo expressed deep gratitude for the gesture and promised not to diminish the Cowbellpedia spirit in all his future endeavours. He disclosed that the competition has not only emboldened him to face the challenges of life, but it has also taught him a big lesson in faith and hope.

“The day I won the competition three years ago, my mother wept. When the then Governor Olusegun Mimiko invited me and my parents to the Government House in Akure for doing the state proud, I wept especially after the Governor shook my hand. I can never forget such moments. God and Promasidor have been kind to me. I will never forget,” he said.

The Cowbellpedia ex-champion said that the process to winning the scholarship to Russia was rigorous, but he was glad to beat the thousands of applicants who went through the various stages of test, examination and elimination. “Actually, I got the information from a friend and I collected the form. The process was tough, but I just had this confidence that I can fly. I told my friends that after Cowbellpedia, nothing can scare me again, especially the fact that we were the first set on the TV Quiz Show,” Akinkuowo said.

He described the scholarship as a dream come true since Aero or Space engineering has been his childhood dream. “The Civil Engineering, I was studying at the University of Ibadan was actually my second choice. So, when this came, it was indeed, a dream come true,” the young lad said with a broad smile.

The Cowbellpedia initiative has produced champions and heroes in the last two decades. Last November, Munachi Ernest-Eze, a student of Loyola Jesuit College, set a new record by winning both the Junior and Senior categories of the Cowbellpedia Secondary Schools Mathematics Television Quiz Show within a period of two years.

Emmanuel Mebude, a student of Ogunlade Memorial Secondary School, Surulere, Lagos, also set a new competition record in speed and accuracy. He answered 17 questions in the “Cowbellpedia 60 Seconds of Fame” segment in the preliminary rounds of the Senior category. Oluwaseun Idowu held the previous record of 16 questions in the Junior category.