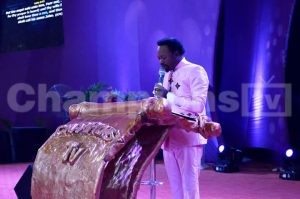 Despite many criticisms, one thing that can never be taken away from this Abuja-based man of God, Prophet Joshua Iginla, is the accuracy of his prophesies.

No matter what, when God truly speaks, the wise listen and amidst controversies, God will always vindicate his servants.

This aptly described the impeccable prophesy which God’s servant and shepherd In charge of Champions Royal Assembly, Bro. Joshua Iginla dished out about Kenya’s presidential election.

On Thursday, October 26, 2017, the country of Kenya was enmeshed in a brouhaha over the new election to showcase who will truly take over the rein of government as the initial election conducted a month earlier was annulled by the Supreme Court due to the uproar and crisis that surrounded the victory of President Kenyatta as the winner.

As a result, another poll was conducted on Thursday, October 26, 2017 and the winner remained the incumbent President, Uhuru Kenyatta.

It was a shocking moment as most believed he would lose the election considering the fact that most people believed the opposition, Raila Odinga would turn the tide.

However, this should be no surprise at all as popular Prophet, Joshua Iginla, had on Sunday, July 23, 2017, during a live service in his church, revealed how Kenyatta would win the election even though crisis will emerge he will remain on the sit either miraculously or magically.

‘The nation of Kenya has to pray. I have been praying and I see a leader sitting on a seat. Three were taken out of the four legs of the seat and I saw this leader still sitting and didn’t fall. I don’t know how he managed to remain seated. Is this a miracle or magic? It’s going to be a narrow escape for the ruling party.

‘I see attack, violence, bloodshed after Kenya’s presidential election. But I saw some great men of God praying for the land. I saw their prayers going up like a bubble and God said to me what is supposed to happen that would have been terrible have been averted. Although they will see a sign but it won’t be as terrible as it was supposed to be,’ the man of God had said at during the programme.

Interestingly, the election went according to his prediction because the opposition was already jubilating that the election would be in their favour, but Kenyatta was declared winner.  This resulted into bloodshed as predicted by Iginla.  But surprisingly, the Supreme Court annulled his victory and ordered for fresh election.

Shortly afterwards, critics went to work castigating Iginla that his prediction was not from God as it’s obvious Raila would win during the new election date.

However, on August 6, 2017, Iginla insisted he heard God spoke to him about the election and that the status quo remained unchanged.

True to his word, President Kenyatta was declared winner again.