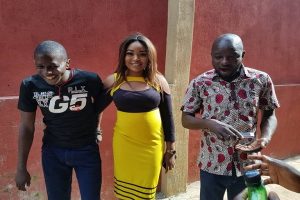 Famous Nigerian movie journalist, Gbolahan Adetayo of City People Magazine, has joined the league of movie producers in the industry.

This attests to the adage that says ‘when a leaf stays long with soap, it becomes one.’

The award-winning journalist has produced his first flick entitled ‘Aala Ife’, which literally means the ‘Boundary of Love.’

Gbolahan, who has been a Yoruba movie reporter for the popular celebrity journal for almost a decade, gathered some of the stars in industry in the new film.

The flick has an interesting storyline that will excite and as well educate the married, singles, young and old, especially mothers-in-law.

Aala Ife is a story of a young man, who loves and shows special regards for his parents especially his mum. Just as he loves his wife, he also showed much love to his mother who suffers partial stroke.

Unknown to him, his wife was not in support of it. He went on a business trip and before he returned, the unexpected event took place. What happened next? Watch out for the concluding part in Boundary of Love ‘Aala Ife’.